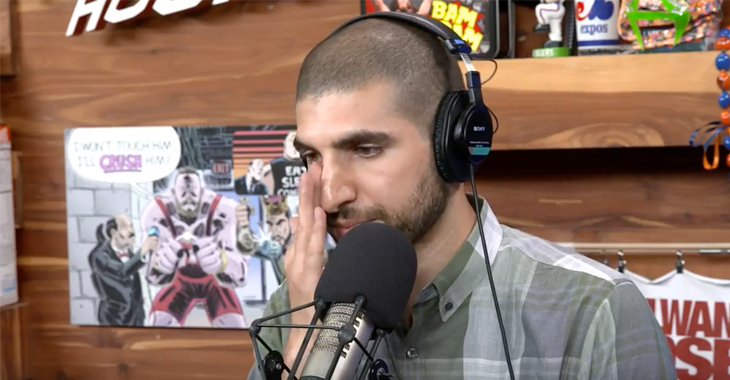 Shocking news hit the world of MMA on Saturday night when MMA journalist Ariel Helwani tweeted that he was kicked out of UFC 199 just before the main event between Luke Rockhold and Michael Bisping.

Bisping went on to shake up the middleweight division, winning the UFC title after knocking Rockhold out in the first round and Helwani was not able to cover the fight as a journalist.

Many were more shocked to hear that Helwani was kicked out and “banned for life” from the UFC.

Helwani spoke on “The MMA Hour” on Monday to talk about his experience and his job as a journalist after he broke the news of Brock Lesnar’s return to the UFC before the UFC unveiled the news.

“A member of the UFC PR staff came up to me and said that ‘Dana White wants to speak you.’ Michael Bisping was about to fight Luke Rockhold and I had a feeling that this wasn’t going to be the most pleasant conversation and I didn’t feel like anything good was going to come out of it,” Helwani said.

Helwani mentioned that he told the UFC staff member that he wanted to watch the main event and cover the fight.

“Couple minutes later, a higher ranking PR person came to me in a very serious way and said, ‘You must go to the back.’

Helwani said that he explained again he was trying to cover the Rockhold vs. Bisping fight but was forced to go the back. Helwani told the UFC staff member that he would not go unless his colleague was there with him.

“I didn’t want to go alone. I didn’t know what was going to happen,” said Helwani. “I wasn’t going to go into that storm alone.”

“So we go to the back. It was just a hallway, few steps from the media room. The main event is about to start by the way, and Dana White is there. Some other members of his team are there and he just says to me, ‘You’re out. Get out of here. You’re done. We don’t want you here anymore. Go to Bellator.’ ”

Helwani said, “How is what I am doing any different than all of the other great sports journalists out there?”

“People are trying to say that I am standing up for journalism and I’m this martyr and all this stuff. That’s cool, and if you want to say that, fine but it’s all a little bit embarrassing because none of this is some great investigative journalism that I’m doing. I’m not going to win a Pulitzer for any of this. This is fight stuff. This is what we love to, this is barbershop stuff.”

Helwani said that White told him that Lorenzo Fertitta wanted him out of FOX and now wants him out of the UFC as a journalist. Helwani added that the conversation between he and White was long and many things were said and ultimately feels deep inside that it was more so the wishes of Fertitta than White to have him banned from the UFC.