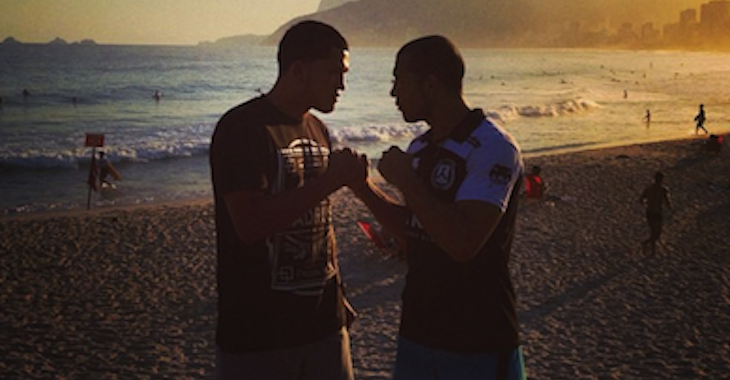 Recently, interim UFC featherweight champion Jose Aldo has been engaged in a standoff with the UFC brass.

McGregor, who was signed to fight Nate Diaz in the main event of UFC 202 at the time Aldo defeated Edgar, was noncommittal about returning to featherweight for a fight with Aldo after his rematch with Diaz. Following his majority decision win over Diaz in August, McGregor revealed that he believed his next fight would be at lightweight, despite UFC President Dana White’s claims that he would be forced to vacate the title if he didn’t defend it.

After it was announced that McGregor would be fighting UFC lightweight champion Eddie Alvarez in the main event of UFC 205 in November, Aldo requested his release from the UFC, expressing his interest in retiring from MMA and moving to another sport. While UFC President Dana White attempted to remedy the situation by telling Aldo he could find him a fight at UFC 205, Aldo stated that he lost the desire to fight due to the situation, and had no interest in returning to the Octagon.

Wow, this would be a Super Fight for the fans! Anything can happen in #mma Dan Henderson is fighting Michael Bisping why not give fans another fight they want… #Repost @fight_talks ・・・ ⚡️One of our followers @norealalex sent me a direct message. I liked his thoughts about Aldo's next fight and decided to post it to my MMA community. Repost this if you want to see Aldo vs Pettis this year! *************************************** "After his confident victory again Edgar, Jose Aldo put himself in position for a rematch with Conor McGregor. However, UFC has its plans on Conor who will face off Alvarez in NYC this November. In this situation, the worst case for Aldo, and his fans will be relying on the worthless interim belt and waiting for moody UFC and Conor who hold featherweight in limbo. Instead, the former champion can fight Antony "Showtime" Pettis, who's had his last fight in the featherweight division. Many fans want to see the super fight between Aldo and Pettis, which will be a defining moment and will undoubtedly bring Aldo closer to the rematch with Conor." Use #aldovspettis, repost. @showtimepettis @sergiopettis @josealdojunioroficial @dukeroufus @joerogan @mma_nerds @mma_anonymous #pettis #aldo #connormcgregor #mcgregor #thenotoriousmma #thenotorious #diaz #boxing #muaythai #mmafighter #brasilmma #ufcbrasil #showtimepettis #ko #tko #choke #streetfight #thaiboxing #bjjfun #bjjgirls #nogi #gi #cmpunk #teampettis