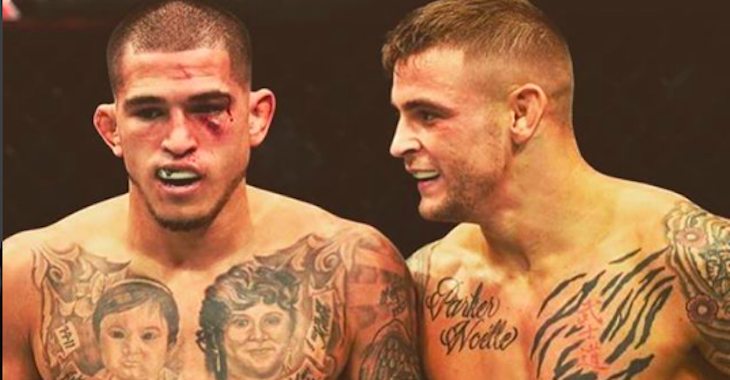 On Saturday night, in the main event of the UFC’s action packed stop in Norfolk, Virginia, lightweight stars Anthony Pettis and Dustin Poirier stepped into the cage together in a fight that was long expected to deliver fireworks. When the cage door locked, the fight delivered.

For two and a half rounds, Pettis and Poirier thrilled onlookers, swapping heavy artillery and submission attempts and painting the canvas red with blood. In the end, however, Poirier earned himself a TKO win, slapping a tight body triangle onto his foe, whose midsection seemed to be injured.

While this win stands out as one of the best of Poirier’s extremely impressive career, it marks the latest disappointing night in a definite rough stretch for Pettis. Though Pettis won his next most recent bout, defeating Jim Miller by decision, he has also been defeated by Max Holloway, Edson Barboza, Eddie Alvarez and Rafael dos Anjos in some of his recent outings.

In the wake of this latest loss, Pettis took to social media to issue a short but classy statement, addressing his fans and congratulating his foe Dustin Poirier.

Hell of a fight!! Congrats to Dustin he fought a great fight…. I fought my ass off jus wasn’t my night.. thanks for the support….

“Hell of a fight,” Pettis said. “Congrats to Dustin, he fought a great fight…I fought my ass off jus wasn’t my night.. thanks for the support.”

Now a tough 3-5 in his last 8 outings, Anthony Pettis appears to be struggling. What do you think should come next for the former lightweight champion and featherweight title challenger? Do you think he can still hang with the best fighters on earth? Make your opinions heard in the comment section!