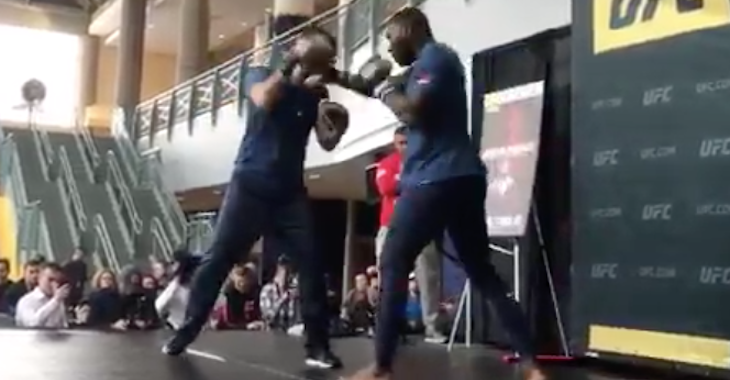 At UFC 210, light heavyweight top contender Anthony Johnson stepped into the Octagon with UFC light heavyweight champion Daniel Cormier for a highly anticipated rematch two years in the making. The showdown was a rather short one, as Johnson surprisingly opted to wrestle with Cormier rather than use his devastating knockout power to attempt to finish the champ. Ultimately, Cormier submitted Johnson, and retained his belt. Following the fight however, corner cam audio emerged of Johnson’s team frantically attempting to get their fighter to strike rather than wrestle.

In a new interview, Johnson’s coach, Henri Hooft, spoke to MMAFighting about the strange gameplan, saying: “The gameplan was very simple,” Hooft said Monday on The MMA Hour. “There’s only one gameplan that you need to do: not wrestle and not come close to DC. And AJ, he’s a guy who normally does that. He doesn’t want to wrestle, because his strength is in his striking, his stand-up and everything. So it had nothing to do with the gameplan, nothing to do with training, because in training, he didn’t really do much different than he normally does. The gameplan was not to wrestle anybody.

“And if you look at, some guys sent me this morning the corner stuff, the readout of corner (transcript), what happened, and you see that nobody really wanted him to wrestle. Nobody wanted him to come close to DC, because that’s going to be playing the other guy’s game.”

In regards to Johnson’s post-fight retirement, which Hooft was already backstage for, he stated: “You can say nothing bad about AJ, all of the moments that he gave a lot of people, especially me,” Hooft said. “Silencing the crowd in Sweden, all of the stuff that he did. All the beautiful knockouts, the striking stuff that he showed. And also as a person, he’s a really, really, really good person. A real good person. So hopefully, one day, he gets a little bit bored with the other stuff he does, and he comes back in a few years and we can do it at heavyweight. I would love to see that.”