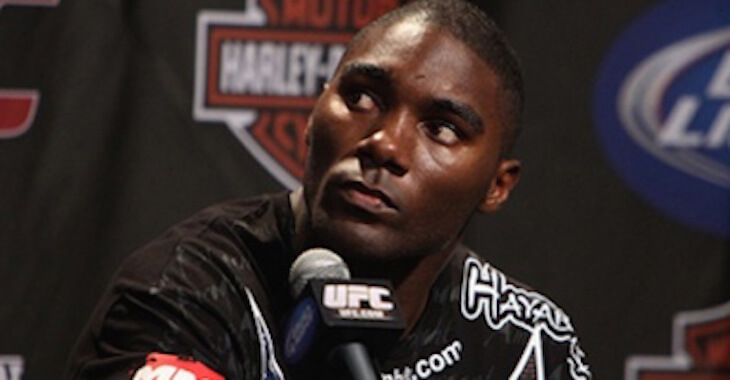 Top ranked UFC light heavyweight contender Anthony Johnson recently found himself left without an opponent for UFC 206 after UFC light heavyweight champion Daniel Cormier withdrew from their scheduled main event scrap for the title. While middleweights Tim Kennedy and Gegard Mousasi offered to step in and fight Johnson on short notice, ‘Rumble’ had his sights set on a potential move to heavyweight to once again fight Andrei Arlovski.

That fight wouldn’t have been the first time Johnson and Arlovski met inside the cage. Back in 2013, the pair met inside the cage at WSOF 2 for a heavyweight fight. In that fight, Johnson broke Arlovski’s jaw as he ultimately ended up securing a unanimous decision win.

While Johnson was under the impression that new UFC matchmaker Mick Maynard offered the fight to Arlovski, he recently took to social media to reveal that there has been more going on behind the scenes:

“I would like to apologize to Andre Arlovski for saying he declined the fight with me…
Come to find out that he was Never offered the fight. Although Mick told me he reached out to Arlovski camp and they declined. Idk the dude and he’s already telling me lies as a match maker.
Thanks for letting me know you were never offered the fight Arlovski…

Now it’s a bunch of middle men with this Arlovski situation.
So somewhere along the lines things were mixed up. I’m not apologizing again soon yall need to have a group meeting and solve the issue. I’m done with it so it is what it is!” Ultimately, Johnson was left off the card, and has since revealed his intentions to wait on the sidelines for Cormier to recover to contest for the light heavyweight championship. Since reports of Cormier’s groin tear surfaced, it has also been revealed that the former Olympian will be sidelined until March.