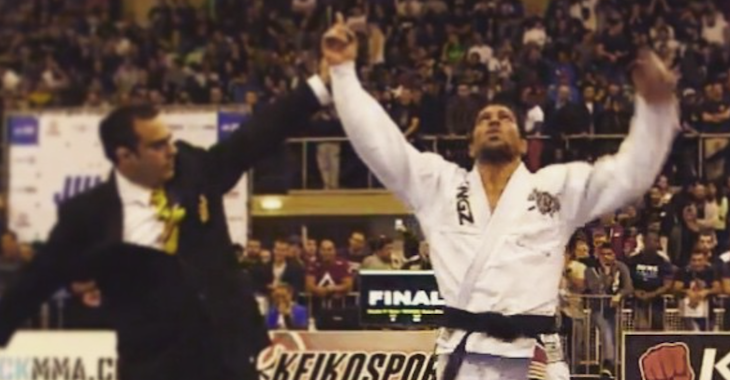 Ahead of what many are calling a historic moment in Jiu-Jitsu history, that will feature a week of training with legendary Jiu-Jitsu competitors such as, Saulo and Xande Ribeiro, Andre and Angelica Galvao, Felicia Oh, and JT Torres, we were able to talk to Mr. and Mrs. Galvao, as well as Felicia Oh about the upcoming Grapplers Escape Cruise.

The cruise will set sail on August 23rd, 2015 from Miami, and will take passengers to Jamaica, Grand Cayman and Cozumel during the 5 days and 6 nights on the ship.

For those unfamiliar with the cruise, here’s the breakdown:

Professor Andre Galvao spoke to us about his experience with Jiu-Jitsu from a young age.

“I fell in love with Jiu-Jitsu, you know, and I started learning Jiu-Jitsu pretty fast. I felt like, ‘man this is the thing I want to do for my life’, and then I never stopped since I was a white belt.”

“With an event as incredible as the Grapplers Escape Cruise, we asked Professor Galvao what he was most excited to show the students in attendance.”

“I want to learn with those guys too, for sure. Always when you’re on the mat you’re learning. I would like to see the other seminars as well, so I can learn with all them.”

“Even the lower belts, I will try my best to learn with them, and bring something back home as well, not just give. I have no doubt I’m going to learn.”

Not only is Professor Galvao looking forward to the Jiu-Jitsu aspect, but also to enjoy some time with his wife Angelica, who will also be teaching on the cruise, and his daughter who will be in attendance. In addition, Professor Galvao believes this is a special event in Jiu-Jitsu history.

I’ve never seen so many good guys like that teaching at the same time, and I believe for sure it will be something very special for Jiu-Jitsu.”

We also spoke to Angelica Galvao about her experience in Jiu-Jitsu, and how Jiu-Jitsu evolved from the time she was a blue belt, after she sat out for several years after the birth of their daughter.

“I had to stop in 2005. I got pregnant and then I had to stop for 5 years when I gave birth to my daughter. But I could see it before, and I see [it] right now, it’s really nice to be able to see how Jiu-Jitsu has grown. The way it has changed, the way people see Jiu-Jitsu, and recognize Jiu-Jitsu.

Everybody who is a mom knows how hard it is to be a mom, and be a wife. I tried to get back, but I thought I couldn’t do it 100% so I just kind of quit, I got rid of my Gi’s, my medals, my everything. And I wasn’t really thinking about getting back into Jiu-Jitsu. But I continued watching, and following Andre, and I was always supporting him and his journey. So when we moved to the U.S. in the end of 2010, when we opened up our gym, I said ‘okay let’s do it’. I wasn’t really thinking about competing, and then I started training training training, and I got back in shape, and I improved my Jiu-Jitsu level, and he say ‘okay it looks like you should be ready to compete at the Worlds in 2011.’ I said ‘you sure, you sure?’ and he said ‘Yes! Yes, do it! Do it!’, and I said okay, and after five years I went back to competition, and I won the Worlds in 2011.”

“After that I just couldn’t stop anymore”

With an event as incredible as the Grapplers Escape Cruise, Angelica agrees with her husband that this will be a historic moment for Jiu-Jitsu.

“I feel amazed and blessed to be a part of this. I think it will be the first in Jiu-Jitsu history, and I feel very blessed to be there [to] not only enjoy, but to teach and share a little bit of my knowledge, and train with everyone, and also learning with everyone. And learn with the amazing instructors that will be there.

It’s going to be amazing, and I can’t wait for that.”

Last, but certainly not least, we talked to Felicia Oh, who has been around the Jiu-Jitsu scene since 2000, and has won numerous championships in her time in the sport.

Given her impressive resume, we asked Felicia to divulge into how she got her start in Jiu-Jitsu.

“In 2000, in October, I went on a hike up to Mt. Whitney, and a storm came in, so that kind of turned into another nightmare, and my friend, who I went on the hike with, her husband who I didn’t really know, was on that trip, he told me about this thing that he was doing called Brazilian Jiu-Jitsu.”

“The next week I went to Jean Jacque Machado’s which was where he was training, and I went to the beginner class, and it didn’t quite occur to me that there were no women there.”

We asked Felicia what it’s like to be a part of something that is being considered a massive moment in Jiu-Jitsu history.

“I feel amazingly lucky to be able to go on this and to be a part of it.”

“This cruise on top of it brings people together, and then you get to share, and learn, and meet people from all different walks of life.”

With each instructor teaching multiple seminars, we asked Felicia what she hopes her students take away from her seminars, where she will be sharing her vast knowledge of Jiu-Jitsu.

“I hope they take away a broader understanding. I tend to get more philosophical and conceptual about Jiu-Jitsu life, but also even in approaching concepts about Jiu-Jitsu. So I know we’ll be teaching specific techniques, but I also like to teach bigger concepts and those techniques tend to be examples of how those concepts can be grasped and understood and made into concepts at some point in their Jiu-Jitsu evolution [they] can apply. So that it’s not just one technique, but it’s a bigger thing that can apply to a lot of techniques.”

“It’s going to be such a unique experience to be away from everything and have Jiu-Jitsu be the focus.”

For our readers who train Jiu-Jitsu, but aren’t familiar with the cruise, we asked Felicia to break down what you can expect if you choose to attend the cruise.

“I’m excited, this is the first one, so they can expect a lot of things, a lot of information, a lot of questions and answers and getting to know a lot of people.”

“They’re encouraging women and kids absolutely too. I think it’s a good opportunity especially if only one person in the family does Jiu-Jitsu, it’s an opportunity to get away. I know when people get obsessed with Jiu-Jitsu, they start thinking about it, say you know you have a guy and he’s got a wife and kids, all he’s thinking about when the family goes on vacation is how he can sneak away and go train, and so this is an opportunity for the family to take a vacation, and everyone has stuff to do whether they’re into Jiu-Jitsu or not. Evan if they don’t do Jiu-Jitsu, at least they’re on a cruise doing cruise stuff. So it’s a unique opportunity to share that with a family.”

You can get all the information you need to know regarding the cruise by emailing Grapplersescape@gmail.com or on the Grapplers Escape website!