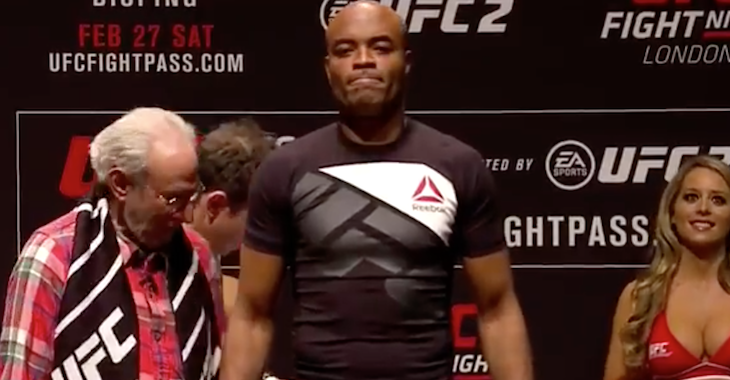 A flying Knee at 4:59 of the 3rd round.  Anderson Silva thought he had a come from behind walk off KO over Michael Bisping.

Not according to Herb Dean.  Heres why.

“That’s the way the mechanic works, is that you replace the mouthpiece during a lull in the action,” Dean said during an appearance on Monday’s edition The MMA Hour. “And [Bisping] signaled once, and Anderson was actually in the process of attacking him. For a lot of reasons that are pretty evident you can’t stop to replace the mouthpiece during a heated exchange, and that qualified as a heated exchange.

“If we were doing that, we’d have guys getting their bell rung, spitting out the mouthpiece to get a little extra time or sometimes you’re feeling a little tired, just spit your mouthpiece out. So obviously we can’t do that in the middle of an exchange.”

Bisping was ahead on the score cards even after the 3rd round. Bisping found away to win a Unanimous decision.

Bisping blames the stitches on Herb Dean but the mouth piece falling out was on him.

Herb is justified in what he did citing the rule book and before the fight all fighters are warned to protect them selves at all times.

“That instruction was given [Bisping] him in the dressing room, and that instruction was also given to him again…right before the match started,” Dean said. “I told him, protect yourself at all times, that’s what I told both the fighters. And they know that that’s their responsibility.

“At the same time, an MMA match is very stressful and a lot weird things happen. People do a lot of strange things, it’s a stressful situation, and you do things that you look back on and think, ‘why did I do that?’ So I don’t know why he did that. But it’s in the rules, it’s actually a written mechanic that was added to the rules, I don’t know, maybe six years ago. So we’ve been doing it, but it’s actually also in writing in the Unified Rules, that the referee is to wait for a lull in the action to replace the mouthpiece.”

Herb assessed Bisping after the bell rang- “Well, [Silva] hit him with the knee and dropped him, and then he walked off and started to celebrate,” he said. “He had been dropped, but you know, in MMA we don’t stop the match just because someone gets dropped. I saw that when he fell he was not unconscious. He was facing Anderson. Anderson didn’t give him a threat to protect himself from, but — I don’t want to start playing what if, what if he attacked and whatnot — the bottom line is he didn’t attack. The round ended and, because Anderson was celebrating, there was some confusion as to what was going on.

“But I never had any confusion. I knew that I hadn’t stopped the match and that the match was going to continue.”

When Silva started celebrating and his corner came into the cage Herb Dean never lost his cool.
“I wasn’t really that worried about that because, it was pandemonium and of course I can’t run around and start yelling at everyone to get out of the cage, there was just too many people,” he said. “But, what I did do is I let people know that the fight wasn’t over. And eventually, once I started expressing that it wasn’t over to the right people — the inspectors, the fighters — that order was going to be restored and we’d continue with the match.

When Herb was told Bisping blamed him for the stitches Dean said it’s possible the Bisping didn’t didn’t understand the mechanics.
“Well, I don’t know, maybe he’s not aware of the rules,” he said. “A lot of fighters, most of them real the fouls but they don’t read all the rules on the mechanics. Maybe he wasn’t aware of that. But the rule is to replace the mouthpiece during a lull in the action.”