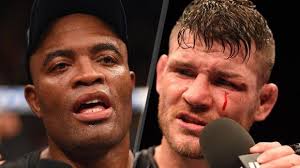 Sounds only fair since Anderson Silva went to London to fight Michael Bisping. Silva’s team would love the rematch to be in Brazil, Silva’s home turf.

“(Bisping) did show a lot of heart. Hats off to him,” Ed Soares posted on his Instagram. “I don’t agree with the decision but tell me what you think of this solution. Rematch in Brazil, if (Silva wins) we have the trilogy in Vegas?”

May 14th is the Scheduled date for the UFC’s return to Brazil.