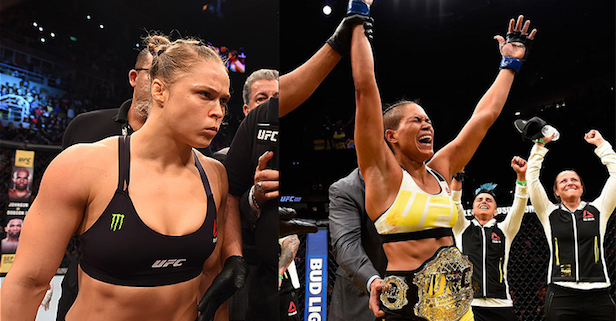 Newly-crowned woman’s bantamweight champion Amanda Nunes may have just recently won UFC gold, but that hasn’t stopped her from focusing on her first title defense.

Nunes won the belt from Miesha Tate at UFC 200, where she submitted Tate  in the first round.

With rumors of former champ Ronda Rousey potential return to the octagon, Nunes discussed who she wants to fight next, and Rousey’s name is at the top of her list.

Rousey hasn’t fought since losing the belt after Holly Holm knocked her out at UFC 193. The woman’s bantamweight title has been a bit of a hot potato, jumping from Holm’s waist, to Tate’s, and finally to Nunes’. Nunes (17-4) doesn’t have an official fight lined up yet, but with Rousey’s potential return, the Brazilian champ has her eyes set on the former long-time divisional kingpin.

The woman’s bantamweight division has been in a state of flux ever since rumors of Rousey’s return surfaced last month. Many in the weight class have been vocal about Ronda not deserving an immediate title shot upon her return, as she would be coming off of a KO loss in a fight that was hardly competitive against Holm.

However, the UFC has not officially announced Rousey’s return, and she isn’t scheduled for a fight as of mid-October.

With that being said, reports regarding Rousey’s return have continued to surface over the course of the past several months.

Who do you see winning a fight between Nunes and Rousey? Would Nunes retain the belt, or would Ronda return to the UFC with a victory? Sound off, PENN Nation!