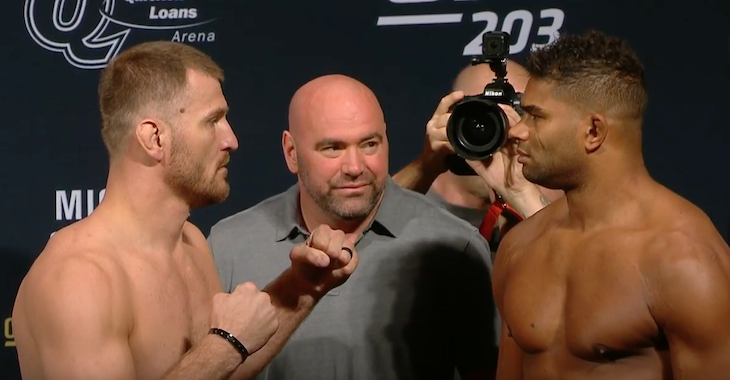 This Saturday, on the main card of the blockbuster UFC 213, Former Strikeforce, Dream and K-1 champion Alistair Overeem will attempt to build on the momentum of a thunderous knee-induced knockout of Mark Hunt by taking out former champ Fabricio Werdum.

If Overeem defeats Werdum, he’ll be two wins removed from a disappointing loss to reigning UFC heavyweight champion Stipe Miocic. He believes that’ll be enough to warrant a second shot at the champ. Apparently, he’ll be challenging Miocic with a post-fight callout if he defeats Werdum at UFC 213.

Overeem explained this plan in an interview with MMAFighting.com at the UFC 213 media day.

“Listen, after I beat Fabricio Werdum next week, Saturday, I’ll be challenging Stipe,” Overeem said. “You can expect me to call him out with the mic.”

Overeem then recounted his early success in his brief fight with Miocic, during which he was able to drop the champ.

“There were some mistakes made,” he said. “That being said [it was] heat of the moment stuff. I can tell you that my cards are shuffled differently these days. I can’t wait to show my new hand.”

Overeem’s knockout defeat of Mark Hunt occurred at UFC 209 in early March. His failed title bid opposite Miocic, meanwhile, went down in September of 2013, at UFC 203. The 27-year-old Dutchman is 42-15 overall.

Werdum, meanwhile, has fought just once since he surrendered the heavyweight title to Miocic in May of 2016, succumbing to a first-round knockout. In his first fight back since losing the title, he scored a chaotic decision win over Travis Browne. The 39 year old is 21-6 in sum.

Alistair Overeem and Fabricio Werdum are 1-1 across two previous bouts, with Werdum winning the first by submission, and Overeem winning the second by decision. Do you think the winner of this fight deserves a shot at redemption against Stipe Miocic?