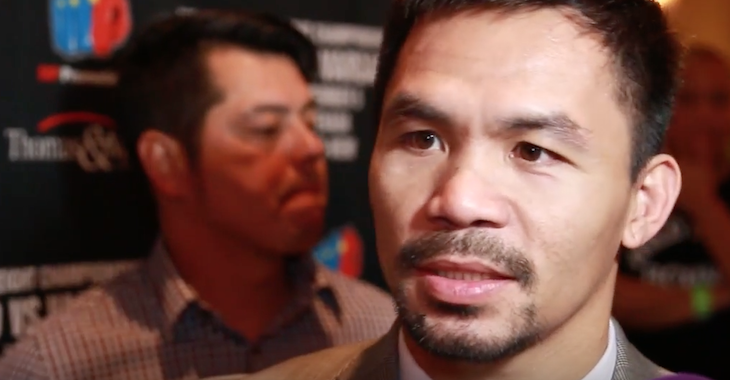 Current UFC lightweight champion of the world Conor McGregor will take his talents to the squared circle tonight in Las Vegas where he will attempt to upset undefeated boxing legend Floyd Mayweather.

“Mystic Mac” and “Money” both comfortably made weight yesterday evening in Las Vegas, with the American weighing in at 149.5 pounds and the Irishman at 153 pounds.

After making weight for their 154-pound super-fight, Mayweather and McGregor would engage in one final pre-fight staredown.
The always brash Irish superstar peppered Mayweather with insults during the staredown but “Money” seemed unfazed by McGregor’s antics.

Following the completion of yesterday’s ceremonial weigh ins, Floyd Mayweather took to Twitter where he threw shade at “Mystic Mac” for his antics during the staredown.

Shots fired! @mannypacquiao with the shade and blessings for @FloydMayweather before his big fight vs. @TheNotoriousMMA! pic.twitter.com/cULhiWkv01

Shortly after that, Manny Pacquiao responded to Floyd Mayweather’s tweet and poked fun at the undefeated boxing legend while also sending his blessings.

“But running does 😉 God bless on your fight tonight” – Manny Pacquiao

Who do you see tonight’s Mayweather vs. McGregor contest playing out? Sound off PENN Nation!