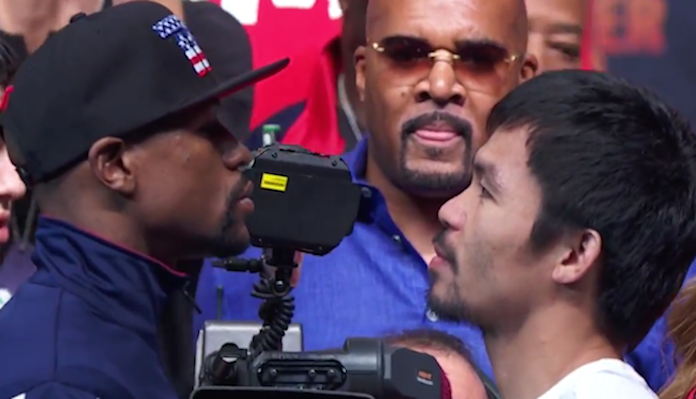 In May of 2015, Floyd Mayweather defeated Manny Pacquiao in one of the biggest fights in boxing history — although the action itself was not particularly memorable.

More than four years later, when Mayweather is ostensibly retired and Pacquiao is enjoying a major resurgence at 40 years old, there is still widespread interest in a rematch between them.

Much of the latest buzz about this rematch stems from Mayweather attending Pacquiao’s Saturday decision defeat of Keith Thurman. Ever since this fight, the pair have been going back-and-forth on social media.

I find it real ironic how every time Pacquiao’s name is brought up in the media, my name is always attached to it. This man’s entire legacy and career has been built off its association with my name and it’s about time you all stop using my brand for clout chasing and clickbait and let that man’s name hold weight of its own. For years, all you heard was that ” Floyd is afraid of Manny Pacquiao”. But what’s funny is, when we finally fought, I won so easily that everyone had to eat their words! All of the so called boxing experts, critics and jealous American “fan base” either went mute and ran for cover or made every excuse in the world as to why I should give Manny Pacquiao a rematch. My take on all this bullshit is that y’all are just upset that I broke Rocky Marciano’s record and hate the fact that a Black, high school dropout outsmarted you all by beating all odds and retiring undefeated while maintaining all my faculties simply by making smart choices and even smarter investments. Ultimately, I will always have the last laugh! – Floyd Mayweather on Instagram.

Manny Pacquiao was quick to respond to this dig, chiming in on Twitter.

.@FloydMayweather You come to my fight and then use my name in a post but I’m the one that is trying to stay relevant? 🤔 if you want to be relevant again… #MayPac2

“@FloydMayweather You come to my fight and then use my name in a post but I’m the one that is trying to stay relevant? 🤔 if you want to be relevant again… #MayPac2” – Manny Pacquiao on Twitter.

Floyd Mayweather then issued another lengthy response, making comments about his wealth and his lucrative December exhibition match with Japanese kickboxer Tenshin Nasukawa.

“Let’s stick to the facts! Bob Arum is no longer your promoter, so when it comes to @mayweatherpromotions & PBC events I’m the HNIC!
Bottom line, I make more money than you; I beat you, then I signed you! I was only at your fight supervising you, my employee, as any real BOSS would do. You made $10Million for 12 rounds, when I just made $9M in under 3 minutes playing around in an exhibition with a pizza delivery guy! I beat you mentally, physically and financially!
Remember, you fight cause you have to, I fight when I want to!” – Floyd Mayweather on Instagram.