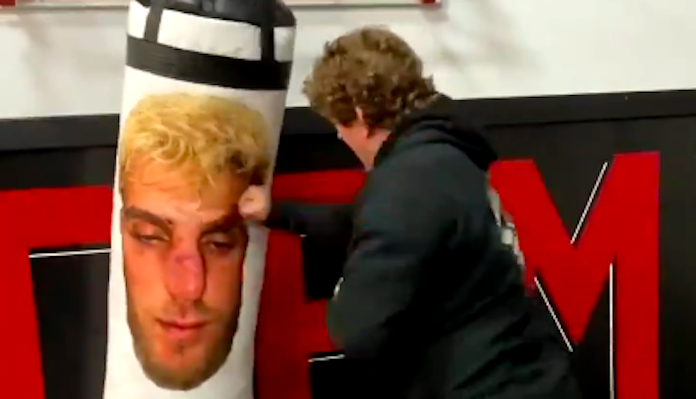 Jake Paul continued to ramp up the trash talk on rival Ben Askren, telling “Funky” that he “fights and looks like a middle-aged Dutch woman.”

Paul and Askren meet on April 17 in the headliner of a professional boxing match on Triller PPV. Paul, a YouTube sensation who has picked up two dominant knockout wins as a boxer, has quickly bloomed into one of the biggest draws in combat sports. Askren, meanwhile, is one of the best trash talkers on social media and a former UFC star. Though this is his first pro boxing match, Askren has been doing a tremendous job of promoting the fight and making it interesting for fans. With over two months left before the fight takes place, both men are doing their part to up fan interest.

One of the ways Paul and Askren are getting fans interested is with their trash-talk, and Paul continued the onslaught on Askren during a recent interview. Speaking to TMZ Sports, Paul reacted to the video of Askren hitting a Jake Paul-faced heavy bag. Though Paul gave Askren some credit for hyping up the upcoming fight, he said that isn’t going to change the fact that he’s going to knock him out in the first round.

“It’s funny, bro. I’m starting to like Ben, oddly enough. He’s funny. He’s entertaining me right now. I thought that was hilarious. I thought, ‘Bro, what are you doing?’ Like what is that? And it looks like his hands are so small. It looks like he has tiny hands in that video,” Paul said.

With two months left to promote the fight, don’t expect these two to calm down with the trash-talking anytime soon. How excited are you for Jake Paul vs. Ben Askren?