Jake Paul is responding to accusations that his boxing match with Anderson Silva this past Saturday was a fixed fight.

Paul (6-0) and Silva (3-2) collided in the square circle this past weekend. Their eight-round cruiserweight boxing match took place live from the Desert Diamond Arena in Glendale, Arizona.

‘The Problem Child’ had entered the contest sporting a five-fight winning streak, with 4 of those wins coming by way of knockout. Paul’s most previous effort had occurred in December of 2021 and resulted in a brutal KO over former UFC champion Tyron Woodley.

As expected by most fans and analysts, Jake Paul received the toughest test of his young career from Anderson Silva on Saturday night. ‘The Spider’ was able to land some effective shots and the bout appeared to be very close on the scorecards headed into the eighth and final round. It was in Round 8 that ‘The Problem Child’ was able to score a knockdown of ‘The Spider’, a punch which ultimately secured him the win. 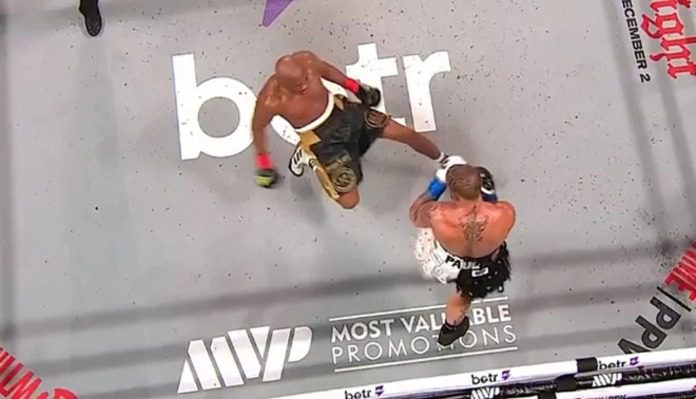 However, on Sunday, a TikTok video went viral that appeared to suggest Anderson Silva had taken a dive in round eight of his fight with Jake Paul (see that video here). ‘The Problem Child’ has since responded to those fight-fixing accusations, stating the following during his recent appearance on The MMA Hour (h/t MMAFighting):

“I think smart people with intelligence are giving me props and respect,” Paul said. “Like the WBC President [Mauricio Sulaimán] saying that anyone who says Jake is not a real boxer is just bitter and is a hater. People like Teddy Atlas showing me mad respect, a lot of fighters showing me mad respect, a lot of MMA guys texting me saying, ‘You look really sharp, that was the best you’ve fought,’ Ryan Garcia showing me respect. So, the smart people who I care about are showing that love. There are the people who will always be there in my career who are discrediting it. Now, they’re saying it was rigged. It went from, ‘Jake’s going to get knocked out by Anderson,’ to, ‘Oh, that was rigged.’”

“I lose faith in my generation and my peers, and us as a society and a world when I see that type of stuff and that type of stupidity. It just sucks. It sucks because I worked so hard for this. I dedicate everything, sacrifice everything, every single day, bust my balls, have a 15-person team working around the clock to help me become the best boxer possible, and when I do something like beating Anderson Silva, they try to take it away from me. But I know deep down, and I guess that’s all that really matters.”

Do you think Jake Paul vs. Anderson Silva was a fixed-fight? Share your thoughts in the comment section PENN Nation!

This article appeared first on BJPENN.COM
Previous articleSean O’Malley says Petr Yan “rocked” him and it was the “hardest” he’s ever been hit: “Just f*****g cracked me”
Next articleSean O’Malley explains how UFC 280 knee might have sent Petr Yan to “ONE FC or Bellator”
© Newspaper WordPress Theme by TagDiv