Floyd Mayweather explains why he called Conor McGregor a “faggot”

On the final stop of the Floyd Mayweather vs. Conor McGregor world tour, things reached an entirely new level of intensity as the two men appeared together in a boxing ring for the first time in London.

The event was an extremely tense one, that even saw Conor McGregor rub Mayweather’s head as he walked by at one point. After launching countless scathing verbal attacks at Mayweather during the course of his speech to the London crowd, McGregor then turned the floor over to Mayweather. 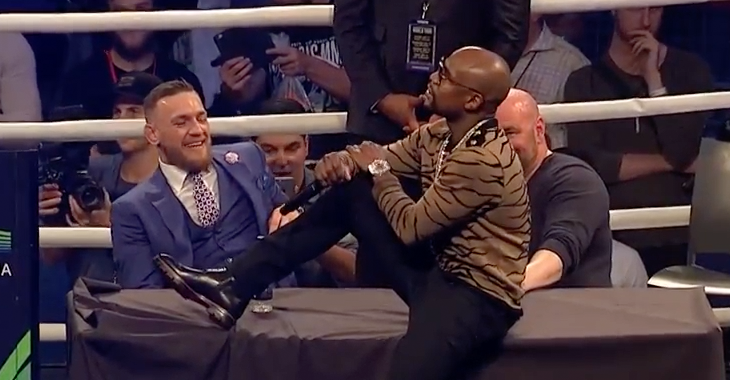 Now, Mayweather has explained why he used an anti-gay slur in his speech, with a Mayweather rep releasing a statement to TMZ on the matter:

“The reason Floyd called Conor the F word is because Conor called Floyd a monkey,” Mayweather’s rep told TMZ. “Floyd has nothing against gays or lesbians at all… Floyd has them on his staff. Floyd has nothing but the utmost respect for gays and lesbians.”

Despite that, Mayweather did say that he loves “everybody from all walks of life.”

The racist comments from McGregor which Mayweather is of course referencing, came during the second and third stops of the tour, as well as an interview on Fallon, in which McGregor referred to ‘Rocky 3’ as the one “with the dancing monkeys” with that being said of course, McGregor denied any of his comments as being racist, and did actually call members of Mayweather’s entourage who are not black “monkeys” during the London press conference as well.