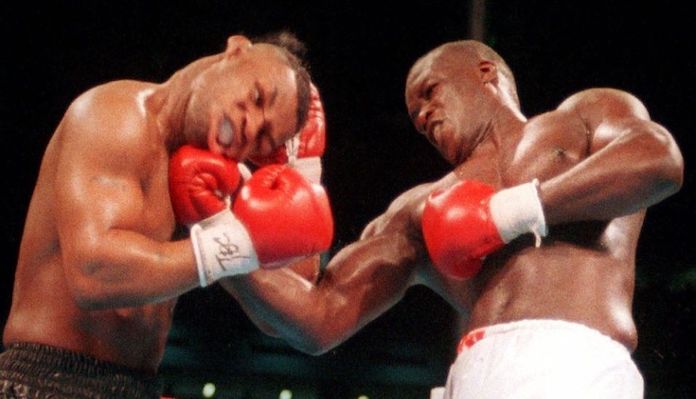 30 years after one of the biggest upsets in sports history, Buster Douglas now wants a rematch against heavyweight boxing legend Mike Tyson.

On February 11, 1990, Douglas took on Tyson in a fight where he was a 42-to-1 underdog. At the time, Tyson was 37-0 with 33 knockouts, while Douglas was just 29-4-1, 1 NC. Tyson was just 24 at the time, while Douglas was 30. In one of the most stunning upsets ever seen in sports, Douglas took it to Tyson and brutally knocked him out in the 10th round to become the new world heavyweight boxing champion. Douglas immediately lost the belt to Evander Holyfield in his very next fight.

This past weekend, Tyson returned to the ring for the first time since 2005 when he fought Roy Jones Jr. to a draw in a fight that had the entire combat sports world watching. Jones is 51, Tyson is 54 years old, and Douglas is 60. Despite his old age and not having fought since 1999, Douglas wants another chance to step into the ring with Tyson. Speaking to USA Today Sports, Douglas called for a rematch with Tyson.

“Sure, I would welcome the opportunity. Being a prizefighter all those years and still feeling pretty good today, you always feel you got one more fight in you,” Douglas said.

According to Douglas, he is still training with amateur fighters in Columbus, Ohio, and said that he would only need six-to-eights weeks of a training camp to be ready to fight Tyson. The boxer said that while fans have often asked him about a Tyson rematch, no promoter ever presented him an offer. He hopes that changes now.

“I’ve been asked about it in casual conversation They always ask, ‘Why didn’t you guys have a rematch?’ It was just never presented really, as far as a rematch. It was often mentioned. That’s about it,” Douglas said.

Tyson said after the fight with Jones that he plans on stepping into the ring again. Although Holyfield seems like the logical opponent, don’t count out Douglas.

Would you watch a rematch between Buster Douglas and Mike Tyson?