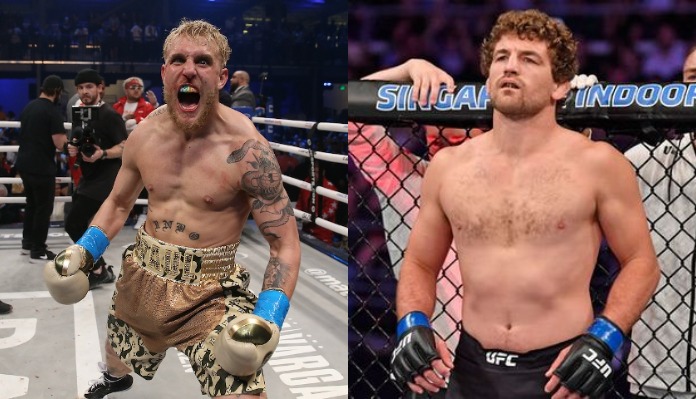 Ben Askren has taken aim at YouTuber Jake Paul for “going silent” after Askren accepted his recent offer for a boxing fight.

Paul has been picking fights with just about everyone since his knockout win over Nate Robinson, and while the majority have dismissed him as little more than a hype artist, nobody can deny the intrigue that comes with seeing him compete in the ring.

Now, after Askren called his bluff, “Funky” is curious to know why he hasn’t heard back from Paul about a potential March date.

“So let me give you a little recap of the situation,” Askren said. “I’m retired, coaching wrestling, doing some podcasts, buying some Bitcoin, enjoying life. I don’t really wanna fight anybody. So in November, this jabroni Jake Paul calls me out, puts up a poster with my name, ha ha ha its’ kinda funny. Whatever, right? No big deal.

“Well then, a couple weeks later, I get a couple texts and a week after that I get some calls and I get an offer.” Askren continued. “Okay, this guy really wants to fight. Am I opposed to making some easy money? Beating up a YouTuber? Of course I’m not. So what do I do? ‘Sure, Jacob, I’ll fight you’. No problem. I accept publicly, on Twitter, nonetheless. Since then Jacob has gone silent. Jacob is kind of a coward. Sorry guys, I don’t think the fight is happening.”

A few days ago, when Askren initially accepted the fight, he further explained his reasons why.

“Yes, Mr. Jake Paul, I do accept,” Askren said. “I know you called me out after that last fight against that bum Nate Robinson. And listen, it’s a pretty simple choice. I’m going to make a whole bunch of money to beat up a guy who is pretending to be an athlete. Because at the end of the day, that’s what you’re doing. I know you may think I don’t have too many standup skills. Also at the end of the day, I don’t really need to.”

“I’m a world-class athlete, I’ve won NCAA titles, I’ve been in the Olympics, I’ve won belts in multiple mixed martial arts organizations,” Askren added. “And quite frankly, I am impressed that you’ve deluded yourself into thinking you’re a fighter. That you are really tough, that you can really box. It’s really quite impressive that beating up another YouTuber and beating up a boxer who has never been in the ring before makes you somehow good at boxing because it doesn’t. So yes, Jake, I accept. I will see you on March 28 in Los Angeles, and I will humble you like millions of people want to see happen.”

Do you think Ben Askren will end up fighting Jake Paul?