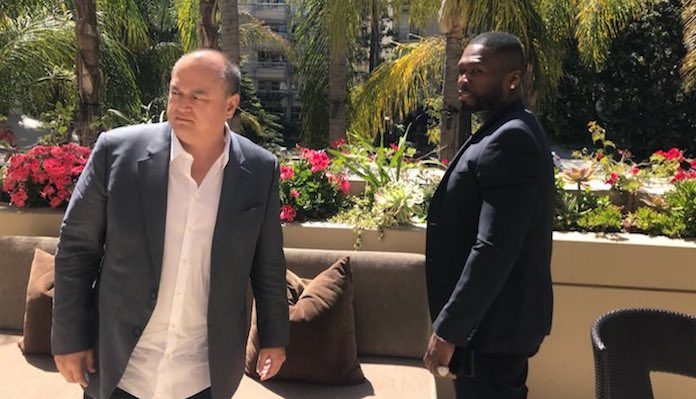 Earlier this year, Bellator MMA began a very public courtship of rapper 50 Cent. The rapper was introduced to Bellator fighters, invited to Bellator events, and lots more. Why, however, was not exactly clear.

Though many fans hoped we’d see 50 cent don some four ounce gloves for a scrap with somebody like Quinton “Rampage” Jackson, it sounds as though his dealings with Bellator will be purely business. Big business.

The promotion spilled the beans on their partnership with 50 cent in a Thursday press release.

“A passionate and knowledgeable MMA fan, Jackson has already agreed to re-invest a portion of his deal by offering one million dollars in cash to the winner of the upcoming Bellator Welterweight World Grand Prix that will air exclusively on DAZN.

“We are thrilled to partner with such a legendary icon who has been a friend to the Bellator family for quite some time. The ‘Get The Strap’ apparel line is just the beginning of many joint ventures we will explore together,” said Scott Coker, President of Bellator MMA.”

As part of this deal, 50 Cent’s champagne Le Chemin du Roi will become a key sponsor of Bellator MMA events.

“Leveraging his viral ‘Get The Strap’ moniker, Bellator and Jackson will launch a global apparel line that will be fashionable and edgy, with distinctive attitude,” the press release explained.

Needless to say, Bellator’s anticipated welterweight Grand Prix, which kickstarts at Bellator 206 this Saturday, just got a lot more interesting thanks to 50 cent’s investment.