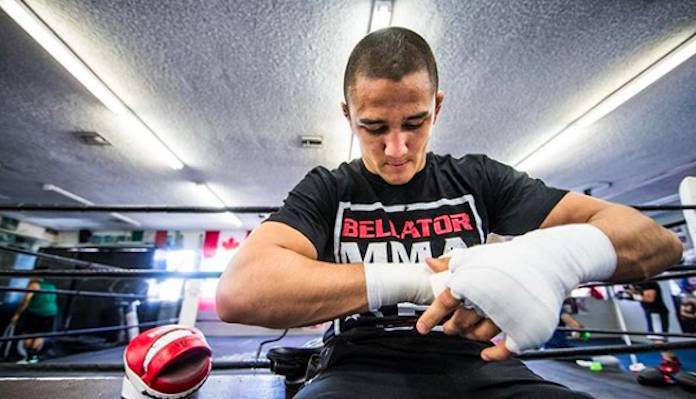 On Saturday, on the main card of Bellator 206, one of the most highly regarded prospects in all of MMA, Aaron Pico, will be taking on Leandro Higo. Pico is looking to continue his run in the featherweight division to an eventual title shot.

While many believe Pico is destined to be a future champion, he already knows what it takes to be a champion as he’s been training with UFC bantamweight champion T.J. Dillashaw at the Treigning Lab in California.

“The way T.J. approaches his training and approaches the game and approaches Duane Ludwig and him being in the training room, and just seeing him train and his overall approach, there is no surprise why he is the champion of the world,” Aaron Pico said in a recent interview with BJPENN.com. “He is going to continue to do great things because I see the work ethic, I see the way he approaches the game and takes care of himself. There is no accident he is at the top.”

Dillashaw, who is a two-time bantamweight champion, is now looking to add the flyweight title to his resume.  Meanwhile, Pico has taken notice of what Dillashaw does during his fight camp and has implemented it into his camp. While Pico is training with a champion in Dillashaw, he believes that has made him a better fighter.

“It has helped me a lot. Growing up I always surrounded myself with high-level guys from all across the world,” Pico said. “I train with the best and being surrounded by high-level guys brings out the best in you and in them. When you start competing with each other overall it just makes you a better athlete and prepares you for these moments.”

Aaron Pico is improving day in and day out with the help of Dillashaw and Ludwig. Something that stands out to Pico is the respect Dillashaw has given him.

Working at The Treigning Lab, Aaron Pico saw first hand what TJ Dillashaw went through ahead of his UFC 227 grudge match with his former training partner Cody Garbrandt.

“Basically, the guys that you were friends [with], you’re [now] going against, and to see him put his head down and grind away and him and Duane just doing what they do best, and that’s work together, and freaking not worrying about the bullshit that was going on… It was admirable to see. To go see him get his belt back and then defend it. Sometimes when guys are talking a lot and you’re the one, the quiet one, working and chipping away it ultimately pays off. So that was one very very cool thing that I saw during that time, during all that time of chaos and this and that and this, and people turning on you. He just kept his head down and said, ‘I’m gonna work. I’m gonna be the best in the world.’ And that’s what he did. So, much respect to T.J. and Duane.”

Catch Aaron Pico back in action at Bellator 206 this weekend.