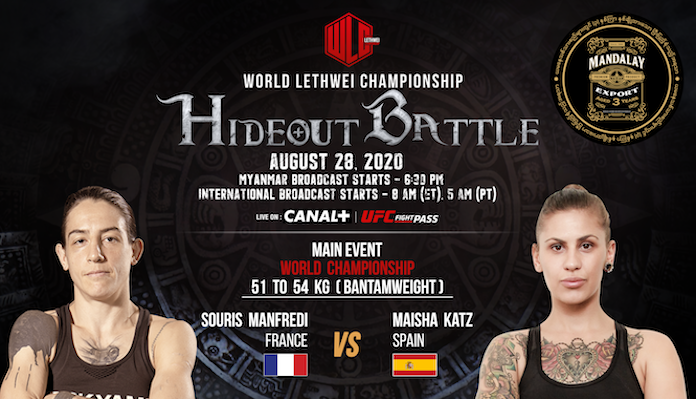 World Lethwei Championship (WLC), the world’s largest Lethwei fighting organization, has released the full card for WLC: Hideout Battle, set to broadcast to over 100 countries from an undisclosed location on 28 August.

WLC: Hideout Battle will air on 28 August at 6.30pm Myanmar time (5am Pacific Time, 8am Eastern Time, 1pm London Time) and is available on UFC Fight Pass, Canal+ and other broadcast partners across 100 countries.

Maisha Katz is a fast-rising star in the combat sports world, having amassed an imposing 17 victories in 20 outings across the world. The well-travelled athlete will now transition to lethwei with a once-in-a-lifetime opportunity in front of her.

So Mi Ong Luktupfah is one of the world’s best combat sports superstars at Bantamweight (51 to 54kg). He is renowned for his explosive and swift strikes, and made a successful return to Myanmar when he knocked out his opponent in his World Lethwei Championship debut.

Artur Te is a former Max FC kickboxing world champion. The Uzbek athlete is of Korean descent and possesses a tenacious mentality when he enters the ring that would make him an ideal athlete in lethwei.

Will you be tuning in for the triumphant return of World Lethwei Championship?