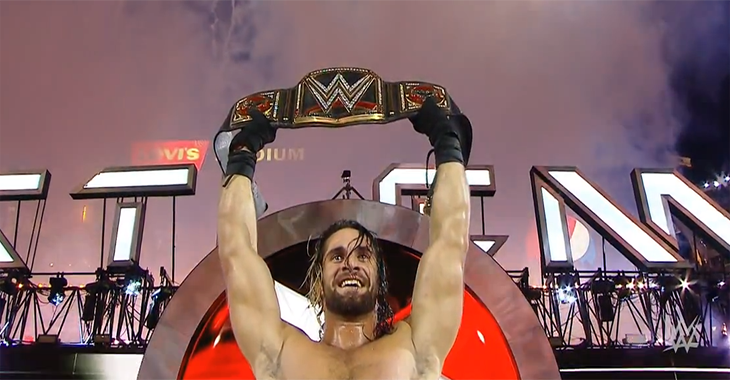 Tyson Kidd and Cesaro def. New Day, Los Matadores and The Usos
WWE Wrestlemania kicked off with a bang as Tyson Kidd and Cesaro successfully defended their WWE Tag Team Championships against three other teams. The odds were against them, but “The Last Trainee of the Hart Dungeon” and “The Swiss Superman” had what it took to walk out of San Francisco as champions.

Daniel Bryan won the Intercontinental Championship after defeating Dolph Ziggler, Stardust, Wade Barrett, Dean Ambrose, Luke Harper and R-Truth
The main card of Wrestlemania 31 kicked off the same way Wrestlemania 30 ended; 70,000-plus fans on their feet chanting “YES!” as Daniel Bryan celebrated his victory. This amazing ladder match ended with an homage to Bryan’s “strong style” in Ring of Honor as Ziggler and Bryan closed the match with a headbutt-off. Ziggler ate one headbutt too many and fell off the ladder, giving Bryan enough time to reach up and win the championship.

Randy Orton def. Seth Rollins
Randy Orton made his PPV return tonight as he defeated Seth Rollins in fantastic fashion. As Rollins was going for his patented “Curb Stomp” finisher, Orton reversed it into his RKO! Even though Orton scored the pinfall victory, Rollins would have the last laugh.

Triple H def. Sting
WWE’s Triple H was able to squeeze out a pinfall victory over WCW’s Sting. This bout was the perfect homage to 1990’s wrestling as there was a handful of interference from Degeneration X and NWO, but in the end, it was WWE that would prevail as Triple H countered Sting’s finisher with a sledgehammer to the skull.

AJ Lee and Paige def. The Bella Twins
CM Punk’s wife AJ Lee scored the pinfall in her match against The Bella Twins. Paige was in the ring for the majority of the match, but she needed to tag out to AJ Lee to wrap things up.

The Undertaker def. Bray Wyatt
The Undertaker may not be the same monster he was years ago, but he proved he still has what it takes to hang in there with the new generation of WWE’s superstars with his win over Bray Wyatt. Wyatt thought he would be able to easily defeat The Undertaker and become the new “Face of Fear” in WWE, but The Undertaker dished out two Tombstone Piledrivers to take home the victory.

Seth Rollins won the WWE World Heavyweight Championship by defeating Brock Lesnar and Roman Reigns
For those of you wondering what the most intelligent way to take the WWE World Heavyweight Championship off Brock Lesnar was… there you have it! Brock Lesnar was DOMINATING Roman Reigns in tonight’s main event and was well on his way to a successful title defense until Reigns quickly turned the tables. While Reigns and Lesnar were both out cold on the canvas, Seth Rollins ran down the ramp and cashed in his Money in the Bank contract. After Lesnar countered a Curb Stomp into an F5, Reigns delivered a Spear to Lesnar! Instead of Reigns going for the finish, Rollins quickly recovered and delivered a Curb Stomp to Reigns! Rollins pinned his former teammate and cemented his place in history as the first Money in the Bank winner to cash in at Wrestlemania.