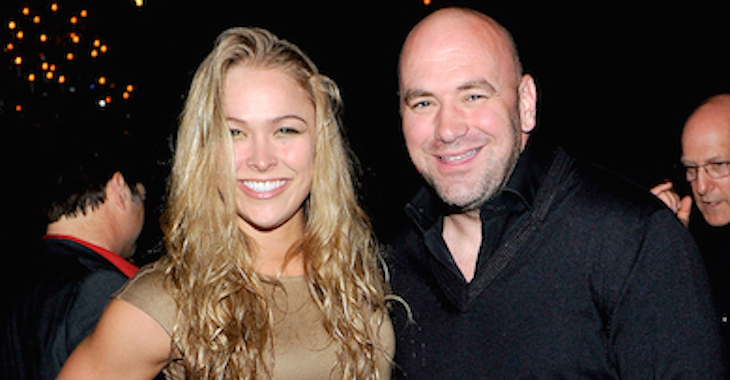 All the hype of a possible record setting re-match with boxing sensation turned MMA fighter will not go down this summer in Las Vegas after all.   Joe Rogan gave his assessment on what the future could hold for Ronda Rousey with her re-match against Holm and it wasn’t a favorable one for the former champ.

White spoke with Yahoo! Sports that Rousey’s  film “Road House” was delayed . The halting of the movie production resulted  in Rousey to ask White to extend he ‘break’ from fighting.

This was an earlier quote White gave before he gave the official word:

“She could do both, but the question is, should she do both?” White told Yahoo! Sports of the former champ, who suffered a brutal knockout by Holm this past November at UFC 193. “She could do both, but why should she? The filming is in a time frame where she’d finish before 200, but it would be cutting it too close.”
Multiple sources are indicating Dana White and the UFC may not even know when the former champ will return back to action much less UFC 200.

“The way I look at this one is, Ronda has worked her ass off for us for the last three years,” he said. “She’s been fighting, promoting and building the sport. If anyone deserves the time off, it’s her. The night (of UFC 193), Holly said she’d do the rematch and that Ronda deserved it and everything else. So we were holding it for her if she wanted to do it.

“What that woman has done is above and beyond what anyone has done. I mean, it’s just unbelievable what she’s done in the last three years. Anything we needed, she didn’t say no to anything – said no to nothing. She even took over responsibilities somebody else was supposed to have. So when she tells me she wants more time, you know what? She’s got it.”

Will Rousey be motivated to come back if the belt is still around Holm’s waist when she returns? You never know, she’s doing well financially with the moon-lighting gig.