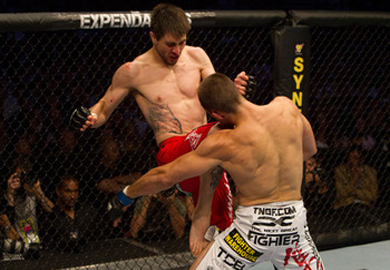 Carlos Condit came in to the UFC hot off of his WEC welterweight title reign that spanned three title defenses. Upon his arrival in to the UFC, Condit was matched with a tenacious UFC veteran who promised not to be a stepping stone for Condit to make his way to the title. That man was Martin Kampmann.

On that night in 2009, Kampmann won a very close split decision over Condit in what would become Condit’s only loss until he faced current welterweight champion, Georges St-Pierre in 2012. After the loss, Condit went on a tear, notching wins against Roroy MacDonald, Jake Ellenberger, Dan Hardy, and Nick Diaz.

Now, in an interview with the MMA Hour, Condit admits that upon the biggest fight of his career up to that point, he bought in to his own hype:

“The first time around, I felt like there was a lot of hype and it was my fight to lose. This time around I’m in a completely different place mentally. I’ve trained really, really hard, and I’m prepared to get in there and fight from bell to bell. In that first fight I cruised a little bit too much. I don’t know, I wasn’t real focused…

Yeah, probably [bought own hype]. That was a few years ago, and I was a few years younger and more immature. At that point in my career I had talent, it had gotten me a long way. I think with experience a lot of things are learned. In that first fight, going into that third round I felt like I had won the first two and I could cruise through the last round and get the decision. That was a really hard lesson learned. I lost my UFC debut. Martin Kampmann put an end to my win streak. That was something I definitely learned from. Either way, that fight’s behind us, and I’m really looking forward to next Wednesday.”

Now, those two men will face off again on Wednesday, August 28th in a rematch, on the first UFC event on a Wednesday since signing a deal with FOX, UFC Fight Night 27.

This time around, Condit looks to erase that loss from his record and turn his title compass back to the welterweight belt.