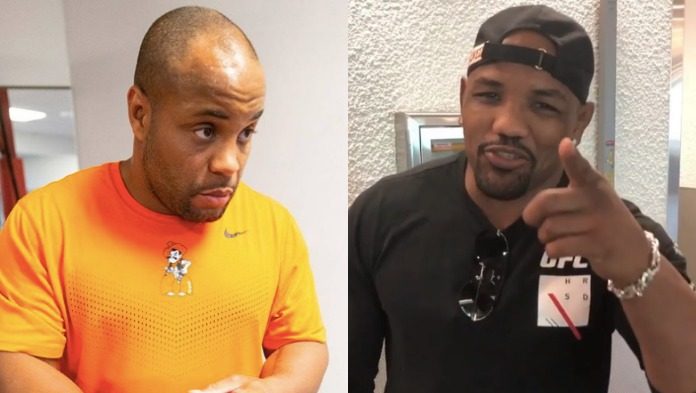 Earlier this week, on Ariel Helwani’s MMA Show, Yoel Romero’s manager Malki Kawa confirmed that, after a pair of weight-cutting blunders, the long-time middleweight contender plans to move to light heavyweight. The hope, Kawa said, was for Romero to meet Daniel Cormier in a light heavyweight title fight in his first fight back in the division.

“So we are talking to UFC about him moving up to light heavyweight,” Kawa said. “And I think what we’re going to propose to them — well to be honest they offered us the Gustafsson fight and we accepted it. But Gustafsson needed to fight in August and Yoel wanted to fight later because he has to have surgery, he broke his orbital. So there are talks for him to fight at light heavyweight.”

“So I was looking at [Romero’s] record and looking at some of the people he’s beat, and I don’t know what the fans will think about a Yoel Romero and Daniel Cormier title fight since Daniel wants big fights, and I think that would be the biggest fight to make,” Kawa continued.

Romero then added gas to fire, calling Cormier out directly on Twitter.

“Here’s the deal…” Cormier said on UFC Tonight, “I never wrestled Yoel Romero, but in wrestling, he probably would have served me up. He’s one of the great wrestlers of all-time. But, you don’t fail a class and then get moved up a grade to the next one.

“Chael Sonnen did that one time, but I don’t know what was going on,” Cormier added. “Chael has a way of doing that. Let’s just say that.”

Apparently, however, Romero is not ready to give up on this potential fight.

In a sizzling comeback, Romero reminded that Cormier didn’t exactly have a perfect run at light heavyweight before he moved up a division to fight for the heavyweight title.

The last time somebody “failed a grade and moved up a #class “ look like it work good @dc_mma #iseeyousoonboi #iluhju pic.twitter.com/9ALIdFLE3h

“The last time somebody ‘failed a grade and moved up a class,'” Romero said in a post that also included a photo of Cormier being knocked out in his 2017 no contest with Jon Jones. “Look like it work good.”

Does a fight between Daniel Cormier and Yoel Romero interest you?