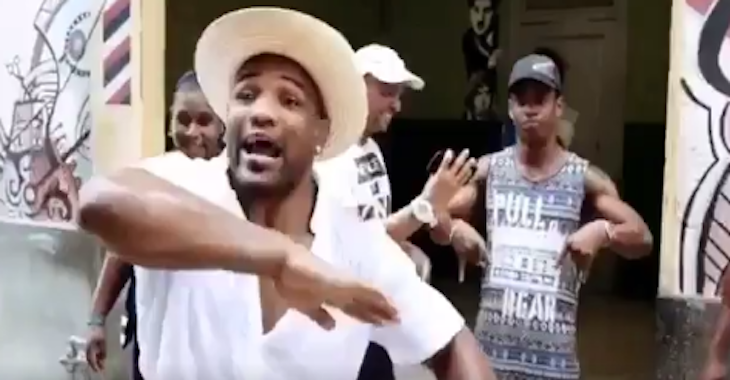 Yoel Romero is on cloud nine after his finish of Luke Rockhold. All signs point to a rematch between him and Robert Whittaker for the middleweight title going down, the big question now is where will it happen? The Chicago card in June has been talked about, but now it looks like Miami is a real possibility. With their big Cuban population, that could mean a huge draw for a Romero main event. It’s an idea that Romero is really excited about. Who knows, maybe Joey Diaz might be in attendance?

“I don’t have an idea [of the date of my title shot against Robert Whittaker]. Maybe July? I don’t know when. I hear he’s sick, he’s feeling no good, he’s feeling very bad. I pray for him. I’m waiting. I’m waiting for him. Thank you God, [my leg is] good. I think a lot about [how I’m able to keep this up at my age]. I try to stay [living] a very clean life and very quiet, but I think this is God. Believe me, I think it’s God. It’s God.”

Can confirm @YoelRomeroMMA has no breaks in his leg, and is injury free… everything came back ok. Looking forward to Robert Whitaker getting healthy and making that fight in the summer

“If you go to Cuba, you can see many people like me too. Normal people. Normal people, not athletes. Normal people on the street. Many people [look] like this. But you can look like this but you can’t fight, because it’s different. That’s why, I think, this is God. ]…]  This is amazing [that the UFC proposed a possible title fight in Miami].  think if that happens, Miami is so big, [they’ll be] happy. Everybody in Miami [would be] so happy. I want it. I want it, I want this to happen. Cuba will [go] crazy, Miami will [go] crazy. Many people in the world will be so happy, it’ll [be] crazy, believe me. I’m very excited, I’m very happy.” — Yoel Romero speaking on The MMA Hour.

Yoel Romero fighting Robert Whittaker for the undisputed UFC middleweight title in Miami during the Summer? That just sounds like all sorts of an awesome time. Imagine if Romero won? People would be doing the salsa in the streets. Yoel Romero’s manager Malki Kawa has said that he was considering UFC 225 on June 9th for the fight, but it seems like the UFC is really interested in putting this Miami card together. They have definitely seemed to take in consideration more and more the talent and which region they’d draw well in. If the UFC decided to make a card for Miami which the Cuban could headline, it’d mark the first UFC event to take place since UFC 42 in 2003. The UFC sets up shop in Orlando, Florida this weekend.

@bisping @danawhite you’re “champ” is scared. I will find him and he will need the octagon to protect him. #seeyousoonboyyy pic.twitter.com/Ziq0pz3Sgj