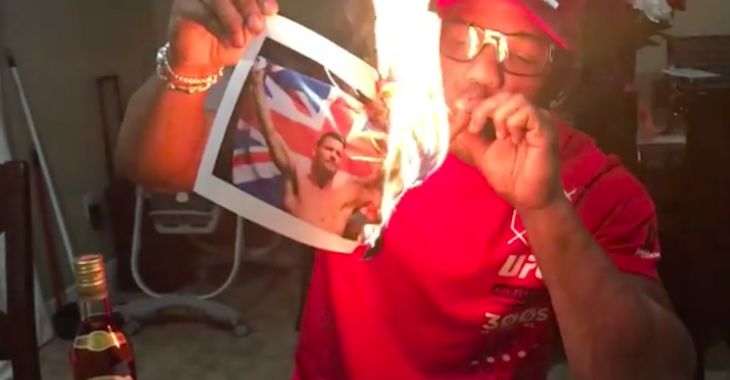 Last weekend, in the main event of UFC 213, Cuba’s Yoel Romero stepped onto the canvas with Australia’s Robert Whittaker in a bid to capture UFC interim middleweight gold. Had he won, he would have earned a fight with the undisputed middleweight champion – and his biggest rival – Michael Bisping.

Regrettably for Romero and his fans, Whittaker was the better man on fight night. Though Romero had some success early on, the Australian surged back in rounds three, four, five and captured a unanimous decision as a result.

Though Romero’s momentum was slowed by this loss, his beef with Bisping is still sizzling. This is in large part due to a controversial mid-fight act from Bisping, in which the champ ripped up a small Cuban flag in and threw it in the direction of Romero and his corner.

After giving a chilling response to Bisping’s actions at the UFC 213 post-fight press conference, Romero has responded in kind by burning a picture of Bisping holding a picture of the British flag (and lighting a Cuban cigar in the inky fumes).  See the video of Romero’s Bisping burn below:

“I’m going to burn you and your flag for disrespecting my flag” Romero says in the video (translated from Spanish by Danny Segura of MMAFighting.com). I’m your big ticket, boy. I’m going to be your nightmare, brother.”

Do you think Yoel Romero an Michael Bisping will ever fight?