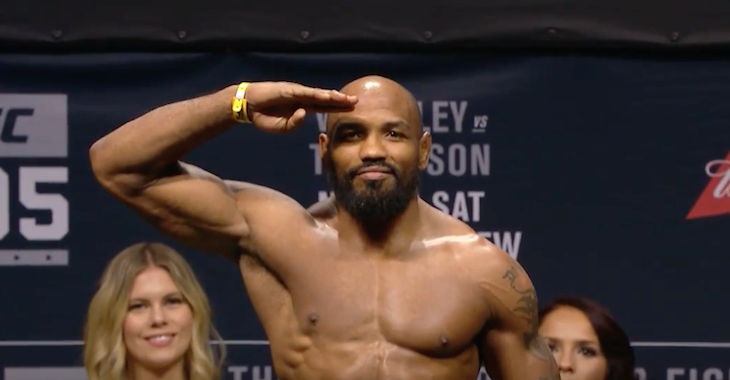 The ongoing saga of the UFC middleweight title has continued to be an extremely confusing one.

Although the UFC kicked off 2017 by announcing a middleweight title fight between middleweight champion Michael Bisping and former welterweight kingpin Georges St-Pierre scrap for later this year, it was then revealed by St-Pierre that he would be willing to fight Bisping any time after October. Given that didn’t fit the initial timeline given by Michael Bisping, UFC President Dana White stated that Bisping would be defending his belt against Yoel Romero instead. Bisping then revealed that his knee was still injured, and that he would be unable to defend his belt this summer anyway. Now, UFC President Dana White has given an update on what the promotion will do if Bisping is truly unable to defend his belt this month, speaking to ESPN in an interview:

This of course comes on the heels of Bisping revealing that he still expects to fight Georges St-Pierre later this year, stating on his podcast:

“Maybe they need an active champion to fight sooner. I think that’s probably the top of it. I honestly don’t think they’re trying to put pressure on Georges. I think they need title fights on the pay-per-views, which I understand. I understand the frustrations from their side, just like a lot of the middleweight division are kind of frustrated. They need good title fights on their pay-per-views and waiting until November is a significant delay so I understand that. But like I said, we did have a deal so I’d like to speak with the UFC and find out what’s happening. “