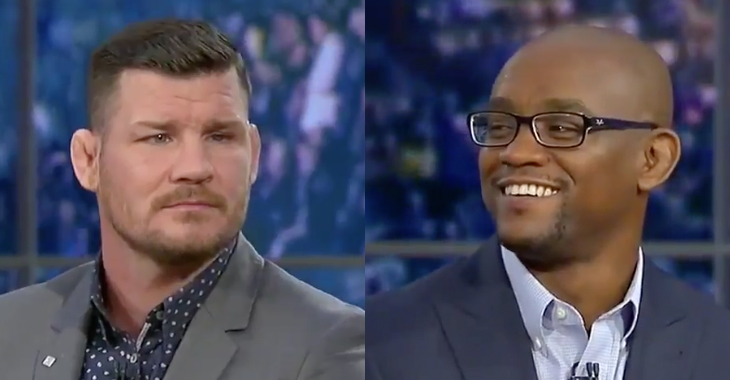 A massive UFC middleweight title fight is scheduled to take place between the champion Michael Bisping and former UFC welterweight champion Georges St-Pierre, who is coming off more than a three-year break from fighting.

This will be Bisping’s second title defense as he became champion at UFC 199 by defeating Luke Rockhold and then making his first successful title defense against Dan Henderson at UFC 204.

St-Pierre last fought in November of 2013 where he and Johny Hendricks fought a close five-round welterweight championship bout where two judges ended up giving St-Pierre the split decision victory.

Given St-Pierre’s dominance he held at 170 and taken into consideration the long layoff and going up a weight class to take on Bisping, odds still opened up with St-Pierre a slight favorite in the matchup.

Following the UFC Fight Night 106 event that took place over the weekend in Fortaleza, Brazil, Bisping and retired MMA veteran Yves Edwards were on deck doing their post-fight analysis of the event. Host Todd Grisham decided to stir the pot talking about Bisping’s upcoming fight with St-Pierre and asked Edwards for his pick on who will win the middleweight title fight.

Yves Edwards gave his take on the UFC middleweight matchup and picked against Bisping who was sitting to his immediate right.

“My money is on GSP,” Edwards said with a smile.

“Thank you. Moving on,” Bisping said in response.

Although Bisping is rumored to have quite a temper and isn’t afraid to get in any arguments, it seemed the middleweight champion was able to keep his cool with his colleague picking against him in the fight against St-Pierre.

Who are you picking to win the UFC middleweight title fight between the champion Michael Bisping and Georges St-Pierre? Give us your pick in the comment section!