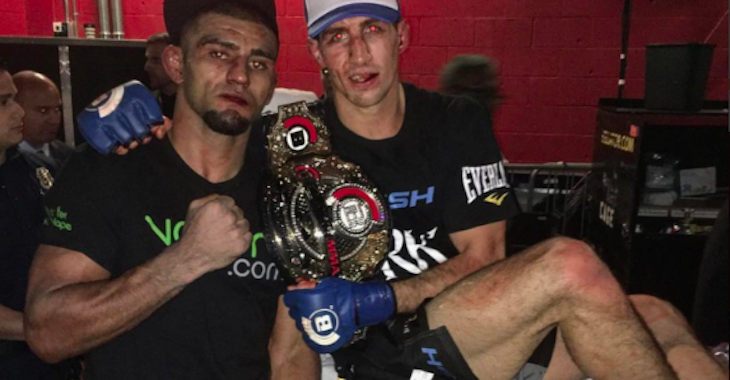 Rory MacDonald has a reputation that transcends organizations. He is known for being violent and absorbing punishment. His legendary fight with Robbie Lawler at UFC 189 cemented MacDonald and his opponent as warriors in a completely different dimension of pain management. MacDonald ended up with injuries in that war that would haunt him for years. Despite the damage scale being off the charts, a new level was reached in his fight with Douglas Lima at Bellator 192. Rory MacDonald admitted that it was probably the worst pain he’s ever felt in his life.

“Yeah, [I thought about given up] a few times. It went through my head, but I just kept pushing through it. I had to dig deep a few times and just break down some mental barriers and keep pushing. Any fight that I’ve had to endure a lot of punishment and keep going forward, yeah. Your mind always plays tricks on you and wants you to give in and it’s just being disciplined and being able to push through those doubts and anxieties. […] I knew [Douglas Lima] was good at leg kicks. I didn’t expect the low leg kicks to be problem, but they were fast and powerful. I wasn’t able to block them very well. After the first one, I knew I didn’t want to get hit with another one. And in the first round I was already pretty hurt by them. By the third, I was struggling pretty badly with it.”

“Hard to compare a physical pain, I’d say this [leg injury from Lima] was the worst, for sure. I would say this one was the worst as far as pain goes. I was definitely emotional, especially going through a fight like that for the belt. It was a special moment for me, because I got to push those mental barriers to get to this championship. It was a nice feeling. It was a hard fight, it was a close one. It was something I really appreciated and I’ll always remember. […] I’m happy that I was able to push through those barriers. Those aren’t easy moments in a fight to get through. I was happy that I was able to stay focused on the prize and just keep going forward and stay focused on what I had to do, regardless of how I was feeling. I had to change things up in the fight. I would have liked to have fought differently, but I had to adjust. The fight went the way it did because of that.” — Rory MacDonald speaking to Ariel Helwani on The MMA Hour.

After his fight, he was quick to praise his opponent and the level of competition in Bellator. Douglas Lima wanted to prove he was one of the very best welterweights in the world by beating Rory MacDonald. He may have not retained his Bellator welterweight title, but he proved what he wanted in his performance. This is probably not the last time these two will meet either. Until then, both of these savages have a lot of healing to do.