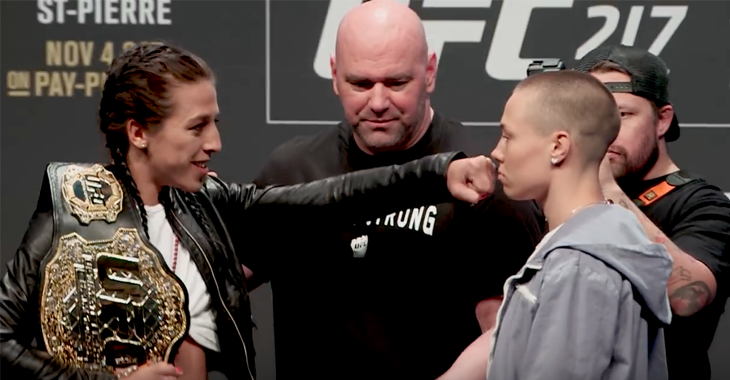 Back in November, in the first of three title fights on the UFC 217 bill, seemingly unstoppable UFC strawweight champion Joanna Jedrzejczyk stepped into the Octagon with unheralded challenger Rose Namajunas. In a shocking upset, Namajunas put the champ Jedrzejczyk down with a first-round punch, taking the belt for herself in the process.

Now, the pair have been pencilled in for a rematch at UFC 223, which goes down on April 7 in Brooklyn, New York. Despite the fact that Namajunas won the first encounter, she has once again been identified as the underdog in this fight.

Oddessa explained the rationale between these opening odds in a statement to MMAJunkie.

“This is the type of fight stats guys live for,” Oddessa said. “It’s about where the challenger is favored, and it’s a rematch of a bout the underdog and current champion won by a shocking first-round stoppage as a close to 5-1 underdog. Statisticians will sharpen their pencils and scratch out all the reasons why they think Rose should be the betting favorite only to get reminded later that night that fights aren’t won on paper. They’re won in the cage.

“And if Jedrzejczyk doesn’t show up as cocky as she did in the first encounter, she’ll look every bit of the 2-to-1 favorite she enters the cage at when the fight’s over.”

Joanna Jedrzejczyk’s knockout loss to Rose Namajunas marked the first defeat of her MMA career. Prior to this loss, she defended the strawweight title with defeats of Jessica Andrade, Karolina Kowalkiewicz, Claudia Gadelha, Valerie Letourneau and Jessica Penne, and won it with a first-round thrashing of Carla Esparza.

Namajunas, meanwhile, earned her shot with a domination of former Invicta champ Michelle Waterson. This win was preceded by a split loss to Karolina Kowalkiewicz.

Who do you think wins this Rose Namajunas vs. Joanna Jedrzejczyk rematch?