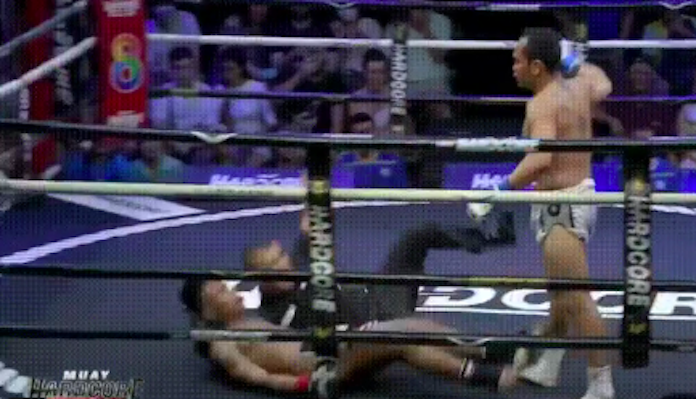 While there has been a lot of negative talk surrounding judging and officiating in combat sports recently, one referee changed the narrative with a heroic and selfless move in a recent Muay Thai bout.

Over the weekend at a Muay Hardcore event, Nak Muay So Sovarathana landed a ferocious elbow which sent his opponent Naymar crashing towards the canvas. Referee Sittichai Ineiad used his own body to cushion the fall which could’ve left Naymar bouncing his head off of the canvas.

Check out the crazy Muay Thai knockout and the referee’s quick decision making in the video below, courtesy of Beyond Kickboxing on Twitter:

The referee’s swift maneuvering to make Naymar’s fall a lot less violent is being seen as a breath of fresh air following a couple of weeks of controversy in the sport of mixed martial arts.

At UFC 247 earlier this month, several fights on the card were mired in controversy when it came to the judges’ scorecards. In the main event, Jon Jones retained his light heavyweight title with a unanimous decision win over a game Dominick Reyes. While the fight will go down as an instant classic, many people feel that the judges got it wrong and that Reyes should be the light heavyweight champion. One judge scored the bout 49-46 for Jones which seems to be the biggest sticking point of all.

In addition, the ESPN preliminary fight between Lauren Murphy and Andrea Lee has seen its share of controversial takes. Murphy would get the split decision nod against Lee in a fight where 100-percent of the media members who scored it on MMA Decisions, and over 90-percent of the fans, had picked Lee to earn the decision.

While speaking to BJPENN.com last week, Lee says she will be appealing the decision.

Following a couple of controversial weeks, it’s nice to find a silver lining in a portion of combat sports that has been almost unanimously negative.

What did you think of the referee Sittichai Ineiad’s maneuver to help protect a Muay Thai fighter in the ring?