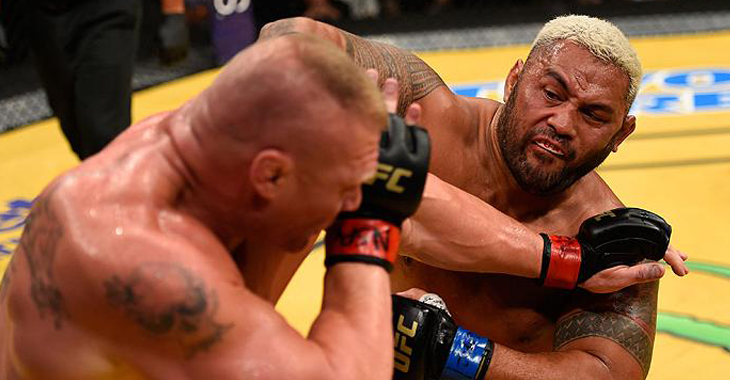 Mark Hunt is making his return to the Octagon after going through a series of tests to make sure it was safe for him to be fighting, but Hunt thinks this is all just hypocritical based on his former opponents and what Dana White has just said about Brock Lesnar. Last night, White seemed all about Lesnar returning to the UFC and as you can imagine, that didn’t sit well with Super Samoan.

“[Brock Lesnar] shouldn’t be fighting. He’s just a cheater. There should be a show for steroid users like him and you can’t tell me any different. He didn’t deserve to be there. He took the short cuts. It just goes to show [the UFC’s] credibility when they say a guy like Brock Lesnar is coming back. So, it’s all about money and you don’t really care about the fighters at all? Some of you said to me, “Oh Mark, you gotta go and do your tests because we’re worried about you.’ You’re lying? Yeah, I thought so.”

“At the end of the day, we’re setting a bad example and the wrong example toward not only a lot of kids coming through that want to be pro fights, you’re talking about martial artists. This is a sport of respect and honor and doing the right thing, not taking short cuts to get to the top and making money. You know what I mean? It’s just pathetic. […] Anyone that doesn’t take steroids, I’m always welcome to fight. I don’t like to sue anyone, but if you’re gonna cheat, the only way I can get back at you is suing your punk ass. [Curtis Blayde]’s is new, he hasn’t been caught cheating and that’s good cause I’m fighting all of these guys that are cheating.” — Mark Hunt speaking to Submission Radio.

You can understand why Mark Hunt is pissed off about this idea. He’s fought a laundry list of opponents that have popped, which he’s trying to sue the UFC over, who kicked him off a card because they were concerned over possible CTE. We’re not going to try to figure that one out, all we’re going to do is make sure to tune in to see the big man fight on Saturday against Curtis Blaydes. He doesn’t have that many more fights left in the UFC.