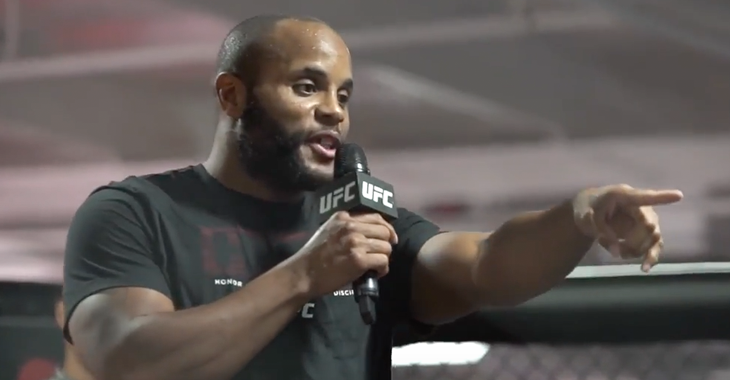 Someone bring Daniel Cormier some swishy pants and a whistle. If there is an epitome of a wrestling coach, it’s the UFC light heavyweight champion with his shirt tucked tight into his work out pants. Throughout his career, he’s dropped iconic lines that’d be at home in any high school or college gym: ‘Ineligible for competition,’ and ‘get your academics in order’ to just name a few. Now, he’s dropped yet another iconic speech for UFC 220. Cormier wants to know how junior varsity Volkan Oezdemir stands a shot at him when the varsity crew couldn’t get it done.

“There’s varsity and there’s JV. Have you ever heard of that? Henri Hooft is a great guy. Greg Jones is a fantastic guy. I don’t know who the jiu-jitsu coach is down there, they’re all fantastic guys. They had a wrestle-off, Anthony [Johnson] whipped Volkan [Oezdemir], so Volkan became a training partner. He went to get beat up. They sent the A-Guy in there, he got whipped. They built him back up, he came back in there again and he got whipped. Now he’s gone. So now they’re going to bring the JV guy.”

Savage post @volkan_oezdemir but since no one knows or follows you I’ll send it out to the public. 3000 likes for such a good post seems like a waste. quick point tho you’re no Jon Jones and I’m no jimmy Manuwa. And I’m a lot better than Kelly Amunson #tapmachine #bum #ufc220 pic.twitter.com/pvGpoHLE2F

“What are you going to do, Volkan? What are you going to do different when you weren’t even the first choice? Volkan, you weren’t even the first choice to come out here and try to beat me. That’s like me telling [my training partner] Frank Munoz, ‘Hey bud, I can’t beat Jon Jones, I need you to go do this for me.’ Come on. Come on, Blackzilians. Come on. He may go on to have a fantastic career. This weekend’s not his.” — Daniel Cormier speaking on The MMA Hour.

Both challengers are in a huge position this Saturday. Volkan Oezdemir and Francis Ngannou have become MVP fighters on the JV team, ready to go up against the star player. It’s there chance to prove that they deserve the position they have been given and to save their spot. A loss here sends them back down the rankings and allows another fighter to step in their place. At the same time, Daniel Cormier will look to convince the world — and his opponent — that he’s still levels above the game. Bell time is in four days. We’ll get our answers then.