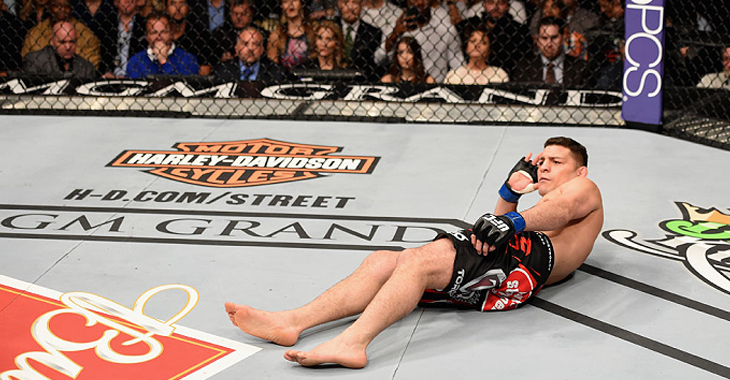 The Diaz brothers and Urijah Faber both hail from Northern California and have been veterans in the sport of mixed martial arts for quite some time.

While the California natives train at different gyms, they have been supportive of each other and it shows with Faber’s recent Instagram post of him wearing a Nick Diaz shirt with his infamous pose that he struck lying on the ground during his fight with Anderson Silva at UFC 183 back in 2015.

Nick Diaz has not fought since that fight with Anderson Silva in January of last year. After the fight, Diaz tested positive for marijuana and was suspended for 18-months. Silva also tested positive for performance enhancing drugs from their fight and was also issued a suspension term of one year.

On August 1, 2016, Nick Diaz’s suspension term ended, but he has gone on record to say that he isn’t looking to get back into the Octagon just to simply fight. The older Diaz brother feels that he is still on top of the fight game and only mentioned Georges St-Pierre as an opponent with a big enough name that he feels would bring in the money and be worth fighting.

Urijah Faber is set to fight Jimmie Rivera at UFC 203 this weekend and is an underdog against the fighter on an 18-fight winning streak.

Faber said in his Instagram post, “Nobody F@!?$S wit da Diaz! This shirt is so money 😎 @arielhelwani 👃🏻 U can sniff one out at @torque1_net per request 🙂 🔍@nickdiaz209 #dontbescaredhomie”

Nobody F@!?$S wit da Diaz! This shirt is so money 😎 @arielhelwani 👃🏻 U can sniff one out at @torque1_net per request 🙂 🔍@nickdiaz209 #dontbescaredhomie