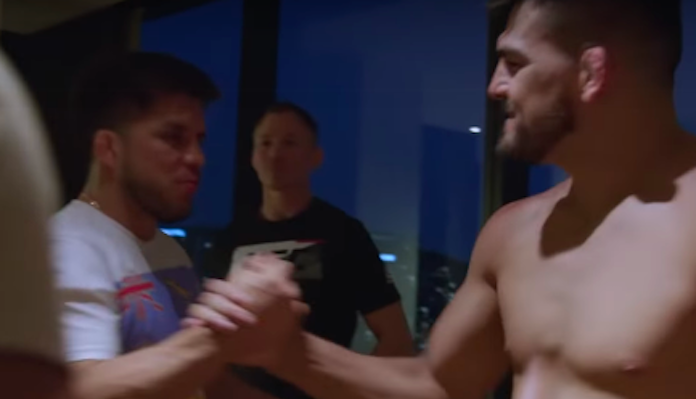 This weekend, in the main event of UFC 234 in Melbourne, Australia, Kelvin Gastelum will challenge hometown hero Robert Whittaker for the UFC middleweight title.

In advance of this fight, the oddsmakers have pegged Whittaker as a noteworthy betting favorite, while fans also seem to be leaning in the direction of the champion.

On the latest episode of UFC Embedded, viewers are treated to a candid moment between the challenger Kelvin Gastelum and current UFC flyweight champion Henry Cejudo.

Cejudo can be heard telling Gastelum to embrace his status the underdog, and prove his many doubters wrong. Watch below:

“The key to this victory is for you to fight with inspiration,” Henry Cejudo told Kelvin Gastelum. “Embrace everything that’s going on around you, the lights, the cameras.

Henry Cejudo’s speech ended with applause from Kelvin Gastelum and his team.

Do you think the challenger can defy the odds and take the belt from Robert Whittaker in the main event of UFC 234 this weekend?