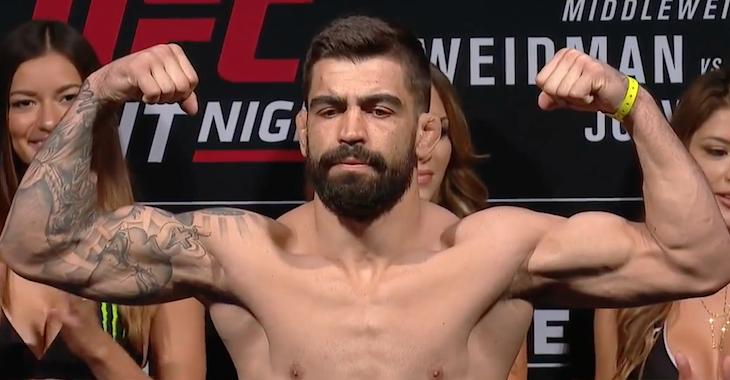 Elizeu will enter tonight’s contest on a six-fight winning streak, his latest being a knockout victory over Luigi Vendramini this past September.

Meanwhile, Curtis Millender has put together an impressive nine-fight win streak, his latest being a decision win over Siyar Bahadurzada at UFC 232 in Los Angeles.

Round one of the UFC Wichita co-main event begins and Millender takes the center of the cage. Dos Santos with a body kick followed by a low kick. He shoots in for a takedown but Millender grabs a guillotine. Elizeu gets his head free and passes to half guard. Big elbows now from the Brazilian. Millender attempts to scramble but gives up his back. Elizeu immediately locks in both hooks and begins searching for a rear-naked choke. Just under three minutes remain in the opening round. Millender scrambles but winds up getting mounted by Dos Santos. Curtis attempts to scramble again but once again Elizeu transitions to his back. This time he flattens Millender out and secures a tight rear-naked choke. This one is all over folks.