The main event proved to be a thrilling five round war. Max Holloway and Yair Rodriguez got after it right from the opening bell and didn’t stop trading strikes until the horn sounded to end their twenty-five minute affair. Although ‘El Pantera’ found success by landing a plethora of heavy kicks, it was the pace, takedowns and volume of punches from ‘Blessed’ that proved to be the determining factor in the decision.

In the co-main event of UFC Vegas 42, heavyweight fighters Ben Rothwell and Marcos Rogério de Lima squared off in hopes of moving up the promotional rankings. The bout did not last long. After landing a pair of heavy low kicks, De Lima clipped Ben Rothwell with a big right hand. The strike left ‘Big Ben’ wobbled and Marcos quickly pounced on him with a flurry of strikes. While the Brazilian was definitely getting off some big shots, Rothwell still appeared to be fighting back and defending. Despite that, referee Herb Dean had seen enough and stepped in to stop the contest, an action that spawned heavy scrutiny (see that here). 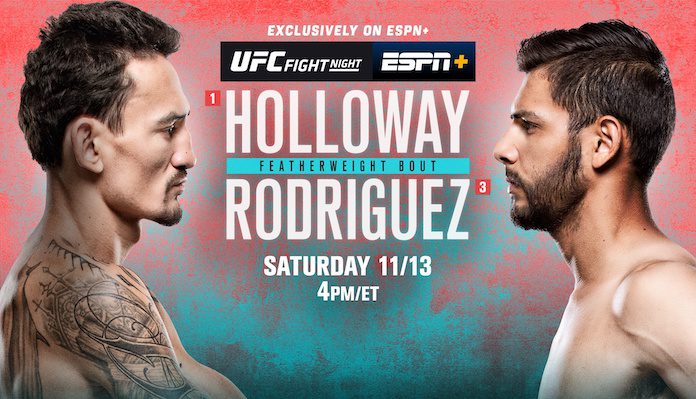 Performance of the night:  Khaos Williams earned an extra $50k for his spectacular third round knockout victory over Miguel Baeza.

Performance of the night: Andrea Lee pocketed an extra $50k for her second round TKO victory over Cynthia Calvillo on today’s prelims.

Are you surprised by any of the performance bonuses handed out by Dana White and company following the conclusion of today’s UFC Vegas 42 event? Share your thoughts in the comment section PENN Nation!