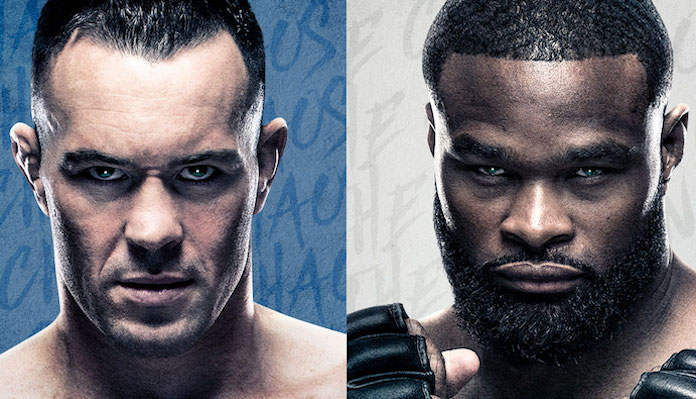 The former UFC welterweight champion, Woodley (19-5-1 MMA), will enter tonight’s grudge match with Covington looking to rebound from a two-fight losing streak. In his most recent efforts ‘The Chosen One’ suffered unanimous decision losses to Kamaru Usman and Gilbert Burns.

Meanwhile, Colby Covington (15 -2 MMA) was most recently seen in action at UFC Newark in August of 2019, where he scored a lopsided decision victory over Robbie Lawler. Prior to his win over ‘Ruthless’, the former interim welterweight title holder in ‘Chaos’ was coming off a TKO loss to reigning 170-pound kingpin Kamaru Usman.

Tonight’s UFC Vegas 11: ‘Covington vs Woodley’ event is co-headlined by another intriguing welterweight showdown as Donald Cerrone squares off with Niko Price.

Cerrone (36-15 MMA) will enter tonight’s bout with Price looking to snap a three-fight losing skid, his latest being a unanimous decision setback to Anthony Pettis. Prior to his loss to ‘Showtime’, ‘Cowboy’ had suffered a rather humiliating loss to Conor McGregor at UFC 246.

As for Niko Price (14-4 MMA), ‘The Hybrid’ will enter UFC Vegas 11 looking to rebound from a TKO loss to Vicente Luque at UFC 249. Prior to the setback, Price was coming off a knockout victory over James Vick which occurred in October of 2019.

Chimaev will be looking to extend his undefeated record to 9-0 with a victory over Meerschaert this evening. The Swedish prospect is coming off a first-round TKO victory over Rhys McKee in his most recent effort this past July.

As for Gerald Meerschaert (31-13 MMA), the Wisconsin native suffered a TKO setback to Ian Heinisch in his most recent Octagon appearance at UFC 250. Prior to the loss, Meerschaert was coming off a sensational submission win over Deron Winn at UFC 248.

If that wasn’t enough to get you interested, tonight’s UFC Vegas 11: ‘Covington vs. Woodley’ event also features the returns of fan favorites Johnny Walker and Mackenzie Dern.

Get all of tonight’s UFC Vegas 11 Results and Highlights below:

Colby Covington vs. Tyron Woodley – Covington def. Woodley via TKO at 1:19 of Round 5

Khamzat Chimaev vs. Gerald Meerschaert – Chimaev def. Meerschaert via KO at :17 of Round 1

ARE YOU SERIOUS!? #UFCVegas11 pic.twitter.com/ihvYCLVTYX

Johnny Walker vs. Ryan Spann – Walker def. Spann via KO (elbows) in Round 1

Mackenzie Dern vs. Randa Markos – Dern def. Markos via submission (armbar) at 3:44 of Round 1

Mirsad Bektic vs. Damon Jackson – Jackson def. Bektic via submission at 1:20 of Round 3

Damon Jackson gets the submission! pic.twitter.com/TBfFPtlvPC

Mara Romero Borella vs. Mayra Bueno Silva – Silva def. Borella via submission (armbar) at 2:29 of Round 1

Sarah Alpar vs. Jessica-Rose Clark – Clark def. Alpar via TKO at 4:21 of Round 3

Journey Newson vs. Randy Costa – Costa def Newson via KO at :41 of Round 1

TJ Laramie vs. Darrick Minner – Minner def. Laramie via submission (guillotine) at :50 of Round 1

THE COUNTER RIGHT! @TysonNam can throw 💣s at bantamweight!

Who are you picking to win tonight’s UFC Vegas 11 main event between Colby Covington and Tyron Woodley? Share your thoughts in the comments section PENN Nation!