‘El Cucuy’ has been slated to square off with the undefeated Russian on five different occasions throughout the course of his career. However, none of those five fights have ever come to fruition.

Despite not having Tony Ferguson on his resume, Khabib Nurmagomedov (29-0 MMA) has gone on to prove himself as one of the greatest fighters in mixed martial arts history.

‘The Eagle’ has gone 29-0 as a professional, including thirteen victories under the UFC banner. During that amazing stretch Khabib has scored stoppage victories over Michael Johnson, Conor McGregor, Dustin Poirier and most recently Justin Gaethje.

While Tony Ferguson doesn’t dispute the fact that Khabib Nurmagomedov is a great fighter, he does believe that his Russian rival has a padded record in MMA.

“Ahhh Khabieber’s (Khabib’s) record… facts: more than half of fatheads professional fights were only two round sanctioned bouts. All before UFC. To be professional fights in most leagues, there must be three sanctioned rounds to be considered professional,” Tony Ferguson wrote. “Fights (sic) leagues such [as] UFC & farm league. The three by two round TUF (The Ultimate Fighter) fights should count on my record if that’s the case. Give me three more knockouts & victories on my record.” 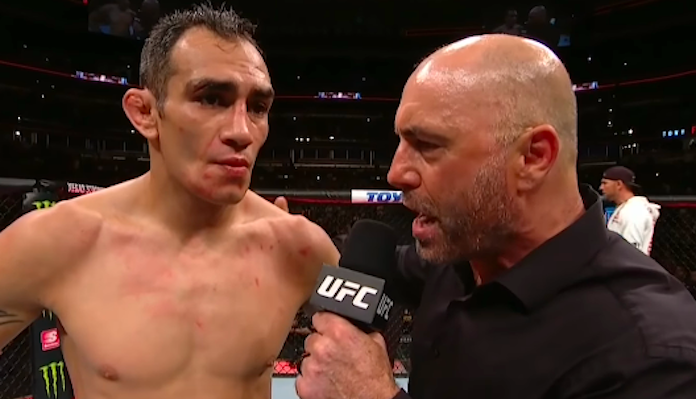 Ferguson (25-5 MMA) is currently riding the first two-fight losing skid of his career. In his most recent effort at UFC 256, ‘El Cucuy’ suffered a lopsided unanimous decision loss to Charles Oliveira.

Tony’s loss to ‘Do Bronx’ was preceded by a fifth-round TKO loss to Justin Gaethje at UFC 249.

Despite his recent rough stretch, Tony Ferguson remains confident that he can make another run at the UFC lightweight championship.

What do you think of Ferguson’s recent comments regarding Khabib Nurmagomedov’s record in mixed martial arts? Share your thoughts in the comments section PENN Nation!