Darren Till and Colby Covington have engaged in some heated exchanges on social media in the past and have now been offered the opportunity to settle their beef inside the octagon at UFC London.

BJPENN.com’s Chris Taylor reported the news of the proposed welterweight clash moments ago on Twitter.

“I’m told the UFC is looking to book a welterweight fight between Colby Covington and Darren Till for #UFCLondon on March 17. Covington has recently stated that he will hold out for his promised title shot, so we shall see what happens.”

Taylor’s report comes shortly after news broke earlier this week that the UFC had snubbed Colby Covington of his promised title shot in favor of booking Kamaru Usman to challenge Tyron Woodley at UFC 235.

Colby Covington was rightfully angry by the promotions decision to “move on” from his proposed title unification bout with Woodley. 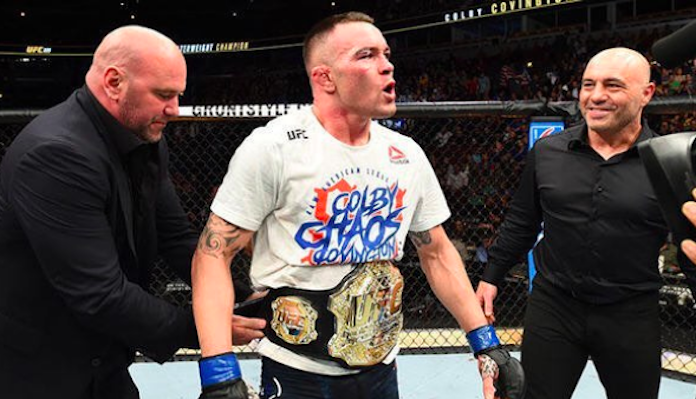 However, after nasal surgery forced Colby from being able to compete at UFC 228, the UFC ultimately opted to give Darren Till a shot at “The Chosen One”.

Woodley would go on to defeat the Liverpool native, Till, via submission that evening in Dallas.

Darren Till has not competed since suffering his first career defeat to Woodley at UFC 228. “The Gorilla” had initially expressed interest in a move to 185-pounds, but it appears he is now willing to postpone that division change in order to take on Covington at UFC London.

UFC London takes place March 16 live from the famous O2 Arena. Would you like to see a welterweight scrap between perennial division contenders Darren Till and Colby Covington added to the event? Who do you think would win? Sound off PENN Nation!