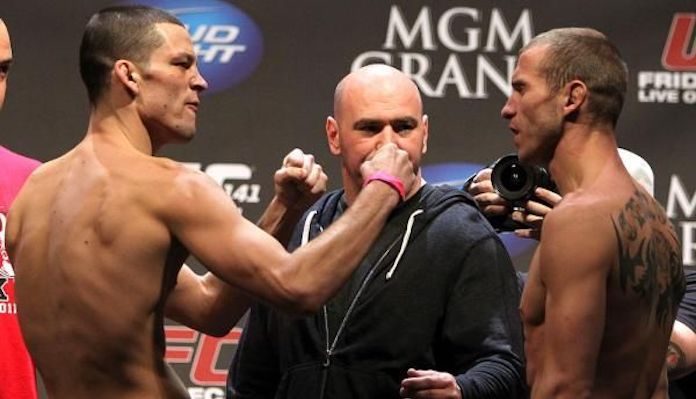 According to Brett Okamoto of ESPN, fan favorite lightweight contenders Nate Diaz and Donald ‘Cowboy’ Cerrone recently discussed a potential rematch — but not at lightweight.

Okamoto says Cowboy and Diaz chatted about a rematch backstage at UFC 235. Diaz suggested he was up for it, but so long as there was no weight cut involved. That apparently means the fight would have to occur in the 185-pound middleweight division — a weight class neither man has competed in before.

Cowboy: Nate, when you fighting again?

Cowboy: Well, just so you know, I’ll fight you.

Cowboy and Nate Diaz first met all the way back 2011, at UFC 141. On that fateful evening, Diaz weathered some snapping leg kicks to capture an impressive unanimous decision win.

Diaz followed this victory with a submission defeat of Jim Miller, which earned him a UFC lightweight title shot opposite Benson Henderson. He lost that fight by decision.

Diaz last fought all the way back in August of 2016, when he gave up a decision to Conor McGregor. He’s currently 19-11-0 overall.

Cowboy, meanwhile, last fought in January, when he delivered an epic stoppage defeat of surging contender Alexander Hernandez. His next most recent win occurred in the welterweight division, where he defeated popular knockout artist Mike Perry.

Are you interested in a middleweight rematch between Nate Diaz and Donald Cerrone?