Don Frye, 56, former mixed martial artist, professional wrestler and actor, while in the stands at UFC 270, decided there wasn’t enough action in the cage and created some of his own.

Apparently there was a heated argument in the stands and Frye punched an angry fan directly in the face. The incident was recorded on another audience members cell phone.

While it hasn’t been confirmed what caused the altercation, the former UFC heavyweight created quite the ruckus leaving many patrons cheering for more, while others were in shock at what just had transpired in front of them.

It is not known if any charges have been laid against Frye for his punch outside of the Octagon.

Retiring in 2011, Don Frye has not competed in the MMA since December 2011, when he lost by KO to Ruben Villareal.

Don Frye has actually spent most of his last ten years out of the limelight but has hinted that he would like to make a comeback and would love to fight Francis Ngannou. 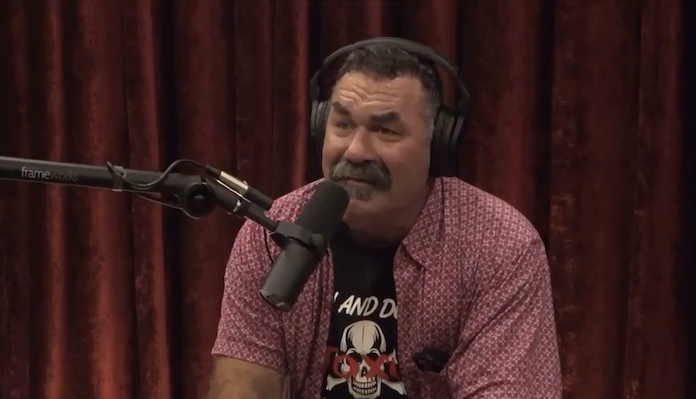 “The Predator” while speaking to Joe Rogan last year commented:

“Wouldn’t it be better to fight someone your age?” Rogan asked.

“Why? They don’t have the belt do they?” Frye responded.

It is unlikely that Frye will ever get a fight with Ngannou, but apparently he was still in training last weekend, albeit in the stands, showing off his punching technique to an audience member.

Do you think Don Frye created more excitement in the stands than what was happening in the cage? Is this Frye’s way of getting attention so he can come out of retirement and once again fight in the UFC?  Share your thoughts in the comment section PENN Nation!

This article appeared first on BJPENN.COM
- Advertisement -
This article appeared first on BJPENN.COM
Previous articleBenson Henderson plans to test Islam Mamedov’s durability at Bellator 273, says he’s been promised a title shot with a win
Next articleTJ Dillashaw not interested in Jose Aldo fight, says he deserves a title shot next: “I left as a champion”