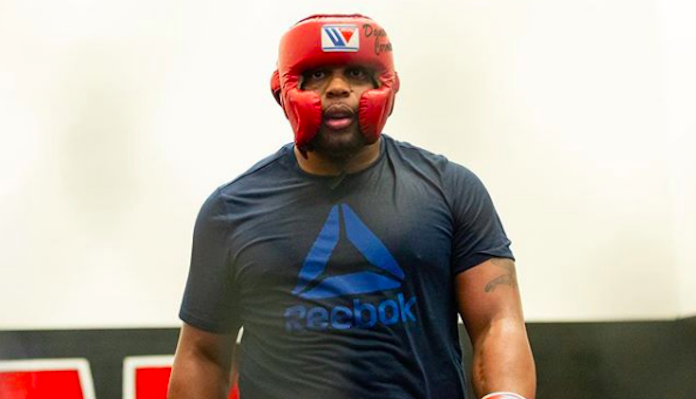 UFC heavyweight contender Daniel Cormier is training at a home gym, and not AKA (American Kickboxing Academy), for his trilogy fight against Stipe Miocic.

On August 15, Cormier will make the final walk to the Octagon of his future UFC Hall of Fame career when he meets his rival Miocic for the third and final time at UFC 252 at the UC Apex in Las Vegas. Cormier and Miocic have fought against each other the last two summers, with Cormier knocking Miocic out at UFC 226 in July 2018 to win the belt, and then Miocic finishing Cormier at UFC 241 in August 2019 to take back his title.

Due to the coronavirus pandemic, many MMA gyms around the world are not currently opened, and AKA is one of them. With AKA not open, Cormier recently took to his Instagram to reveal the home gym that he had constructed for his training camp.

Daniel Cormier: Big thank you to @chadjhaygood and his crew for doing this while I am gone. When I head home I’ll have a home gym in place. Full wrestling and grappling mat, cage door, 2airdynes, 2 echelon bikes, treadmill, 2 heavy bags and ground and pound dummy. I’m so excited about having all this available for camp. Let’s go!!! If you want it bad enough, you can make it happen. #andnewagain

Speaking on a recent edition of the “Weighing In” podcast, host Josh Thomson — a long-time training partner and friend of Cormier at AKA — gave some more insight into DC’s home training camp.

“This fight is not at his camp. This fight is not at AKA, because AKA is closed. So what they are doing is, he built a gym at his house. He has the coaches go there with a couple of the guys like Deron Winn, to wrestle, and also to spar with Kyle Crutchmer and some other guys that were there,” Thomson said. “So I don’t know if we’re going to see the best of both guys.”

The title of the greatest heavyweight of all time in MMA will likely be decided this summer when Cormier meets Miocic for the third and final time. While it’s unfortunate both men are now going to get in their typical training camps due to the coronavirus pandemic limitations, both men are pros and this should be an incredible fight to end the rivalry.

Do you think Daniel Cormier will defeat Stipe Miocic in their trilogy match?