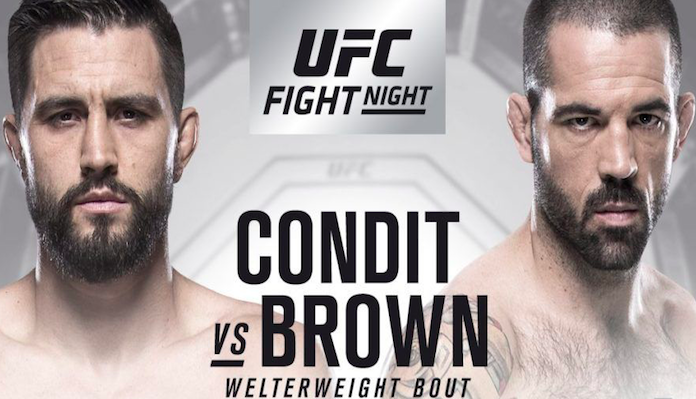 Condit and Brown are two of the most exciting welterweights of the past decade and this dream fight has been one that the UFC has tried to book twice in the past, both times unsuccessfully. The fight was booked in both 2013 and 2018, with the bout falling off each time. The promotion then booked this fight for the third time, and it’s set to take place as the co-main event of this Saturday’s UFC on ABC 1 event. The hope is that with the fight just a few days away, fans will finally get to see this fight.

With Condit vs. Brown just a few days away, White was asked his thoughts on this matchup between two of the most violent fighters in the UFC welterweight division has ever known. Speaking to MMAjunkie.com’s John Morgan, White praised both fighters and admitted that he’s personally very excited to see them throw down.

“Yeah, and I don’t see that going three full rounds either. Two legendary savages in the co-main event. It’s going to be fun,” White said.

Condit (31-13) is coming off of a decision win over Court McGee on Fight Island last year, a much-needed victory that snapped a five-fight losing skid for “The Natural Born Killer.” The former UFC interim welterweight champion, Condit was one of the top welterweights in the world not long ago, even fighting Georges St-Pierre for the undisputed belt in 2012, but the recent losses have seen his stock drop considerably in recent years. However, he showed against McGee he still has something left.

Brown (22-17) is coming off of a knockout loss to top prospect Miguel Baeza that snapped a two-fight win streak over Ben Saunders and Diego Sanchez. Brown is now 40 years old and he’s a guy who has been in so many wars over the years that you have to wonder how many fights he has left at this point. But he showed against Saunders and Sanchez that he still has the ability to knock people out at 170lbs.

Who do you think wins this weekend, Carlos Condit or Matt Brown?