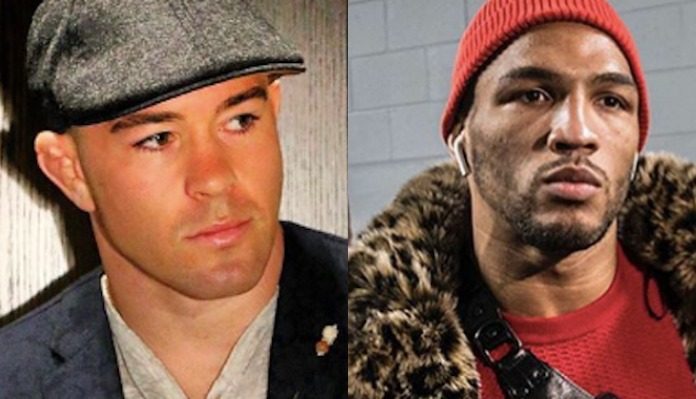 Last night, in the main event of the action-packed UFC Milwaukee card, Kevin Lee came up short for a second time against Al Iaquinta, giving up a hard-fought unanimous decision to his rival.

Post-fight, a distraught Kevin Lee admitted that this loss to Al Iaquinta has him considering a move up to the 170-pound welterweight division, where he would have to endure a less taxing weight cut.

“It might be time for me to make that change,” Lee said after his loss (transcript via MMAjunkie). “I knew it about a year ago, but I’m a real stubborn son of a b***h, so I’m just going to try to make as many adjustments as I can and make it as clean as I can, but it still is very rough for me to get down to this weight. Maybe now it’s time to just go up and look at other options.

“I think I can compete very, very well at 170 and be fast in and out of the pocket, too,” he added. “I don’t know. We’ll see as I kind of get healed up and everything.”

While Kevin Lee seems to like his chances in the UFC welterweight division, Colby Covington, one of the division’s top fighters, was quick to warn him to think twice.

Covington issued his warning to Lee on Twitter on Sunday.

.@motownphenom consider hitting your little baby nuts with a sledge hammer too, cause it's a better option than fighting real men at 170 junior. #ufcmilwaukee https://t.co/Tu26zNSpN5

“[Kevin Lee] consider hitting your little baby nuts with a sledge hammer too, cause it’s a better option than fighting real men at 170 junior.”

Kevin Lee is now back in the loss column after a lopsided defeat of Edson Barboza in April. He’s now 17-4 overall.

Colby Covington, meanwhile, is 14-1 overall. He last fought in June when he defeated Rafael dos Anjos to win the interim welterweight title.

How do you think Kevin Lee would perform at welterweight?