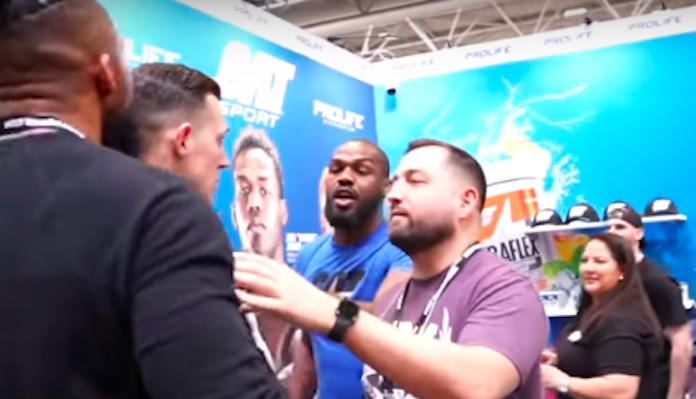 European light heavyweight prospect Chi Lewis-Parry says he is willing to give Jon Jones life advice despite their previous rivalry.

Lewis-Parry is an experienced kickboxer for GLORY and one of the better free agent light heavyweight prospects not in a major organization. Last May, Lewis-Parry got into a shouting contest at an autograph signing by Jones in the UK before security removed him from the situation. He later explained that his beef with Jones dated back to when Lewis-Parry was a member of Daniel Cormier’s training camp before the Jones rematch.

Speaking recently on Andy Shepherd’s podcast, Lewis-Parry was asked if he was still interested in fighting Jones. While Lewis-Parry said he would fight Jones if he was offered the fight, he took the high road on the podcast and said that he would be willing to reach out to Jones and give him some life advice as the champ continues to struggle with personal demons. Lewis-Parry said if Jones apologized to him, he’d gladly give him a helping hand.

“Oh, 100 percent. Because if you’re humble enough that you can approach me and say, ‘Do you know what? It was a bit effed-up what I did, what I said. I apologize. But you don’t understand the life that I live. I’m constantly under scrutiny, under pressure. I’ve got this fame and this access to all of these vices.’ I can say, ‘You know what? I don’t understand that, because I don’t have that. But maybe manage the way you talk to people. And I would say ‘cool.’ Because, in the initial instance, I didn’t have a problem with the guy. I didn’t even know him. He brought me into this,” Lewis-Parry said (via MMAjunkie.com).

“So if the guy can hold his hands up and say, ‘I was wrong. Have you got any advice?’ Or ‘Can you recommend anything?’ Or ‘Do you know anybody that can help?’ No problem, mate. Because I don’t hate anybody. I don’t hold on to hate. But you’re not going to mug me off. I’m not going to have that. It’s a respect thing.”

It’s nice to see Lewis-Parry extend an olive branch to Jones just weeks after the UFC light heavyweight champion was arrested on DWI and gun charges. In the meantime, Lewis-Parry will continue to field offers from other promotions. Undefeated at 8-0, 2 NC in MMA, Lewis-Parry is 36 years old so if he wants to fight in the UFC, now is the time to do so.

Would you like to see Chi Lewis-Parry fight in the UFC?