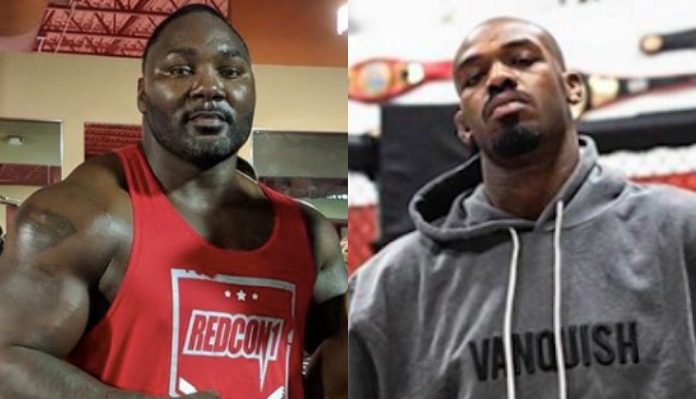 Instead, Johnson has been campaigning for a lucrative heavyweight showdown with the light heavyweight king.

Speaking with UFC, Strikeforce and Bellator veteran Josh Thomson on Sammy and The Punk recently, Anthony Johnson explains why this fight appeals to him so much, and what he’ll need to be paid to make it happen.

“Jon and I were supposed to fight four years ago,” he said. “If a fight that was supposed to happen four years ago is still a hot topic, that’s not some half a million dollar payday. That’s worthy of every penny you deserve to fight somebody.

“I’m not gonna say a number right now,” he added when pressed about how much he’d have to be paid to end his retirement for this fight. “Put it like this. It’s more than a million — plus pay-per-view buys.”

While Anthony Johnson will need to be well compensated for this potential fight, he believes it’s a matchup that will leave everybody happy.

If the fight does happen, the man they call “Rumble” will look to succeed where legends like Mauricio “Shogun” Rua, Quinton “Rampage” Jackson, Lyoto Machida, Rashad Evans, Vitor Belfort, Daniel Cormier and Alexander Gustafsson have all failed, and topple the seemingly unbeatable Jon Jones.

While he recognizes the scale of this challenge, Rumble believes he could pull it off.

“I do think I can take Jon,” he said. “I honestly believe I can beat anybody. I’m a fighter, I’m supposed to believe in my skills.”

Do you want to see a heavyweight fight between Jon Jones and Anthony Johnson?