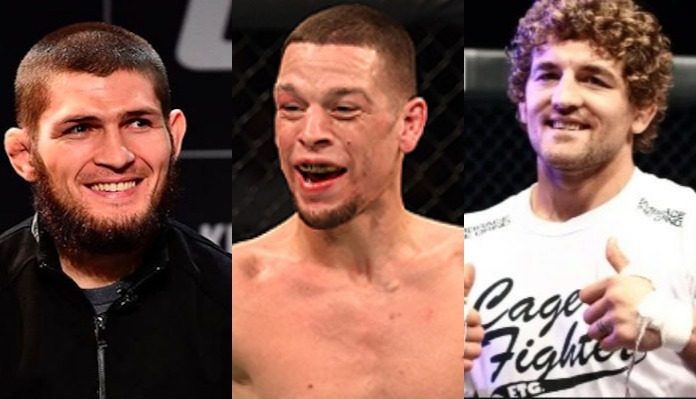 Nate Diaz and Khabib Nurmagomedov have had plenty to say about each other on social media over the last few years. Early on Tuesday morning, the trend continued, as Diaz took a shot at the dedicated Sambo practitioner on Twitter.

“Sambo?” Diaz wrote in a post that included a classic picture of Nurmagomedov shoehorned into a tiny tub with several of his training partners (h/t Asian Persuasion MMA)

At present, Khabib Nurmagomedov has not responded to this comment from Nate Diaz. Luckily for him, UFC welterweight star Ben Askren has.

Askren quickly jumped into the conversation, accusing Diaz of partaking in similar tub sessions in his native Stockton.

“Tell me the boys in Stockton haven’t done this a time or two after a hard training session,” Askren wrote in response to Diaz.

Khabib Nurmagomedov last fought in October, when he submitted Conor McGregor in the main event of UFC 229. After the fight, his and McGregor’s teams were involved in a frenzied brawl. Nurmagomedov was suspended nine months for this brawl, but is adamant he will sit-out one year in solidarity with his teammates who were suspended longer.

Ben Askren made his UFC debut at UFC 235 earlier this month, when he scored a controversial submission victory over Robbie Lawler. He’s now expected to battle the winner of Jorge Masvidal and Darren Till’s UFC London showdown next.

Nate Diaz has not fought since August of 2016, when he gave up a hotly contested decision to his rival Conor McGregor. That being said, he was briefly linked to a fight with Dustin Poirier at UFC 230 in November. Unfortunately, this fight fell through.

What do you make of this Twitter beef involving Khabib Nurmagomedov, Nate Diaz and Ben Askren?