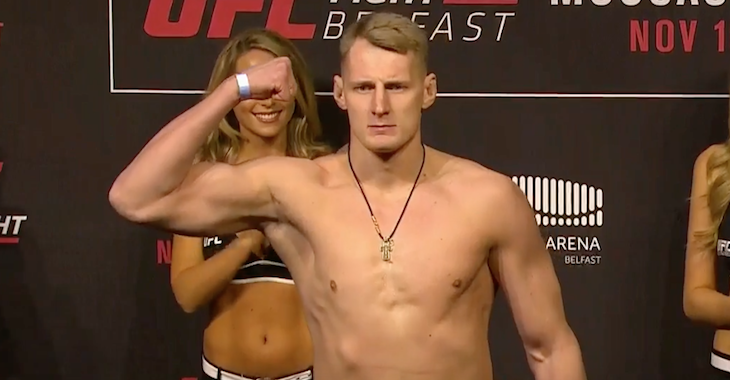 Round one begins and Struve lands a right hand early. Both fighters fire off low kicks. Volkov lands another. He goes to the body with a right hand. Struve responds with a hard jab. He lands a flying knee and then misses with an uppercut. Struve circles and then lands a low kick. Volkov presses forward and lands an uppercut. Struve gets off of the fence and takes the center of the cage. He fires off a pair of left jabs. Struve with a head kick. Volkov catches the strike and lands a takedown. Struve is back to his feet and scores with a massive uppercut. He lands another. Volkov appears to be stunned. He retreats and then lands a nice kick to the body of Stefan. Struve returns fire with a body kick of his own. He attempts a knee. Volkov looks frustrated now. Struve with another big uppercut. The fighters clinch and Volkov lands a nice knee inside. They break and Struve just misses with a head kick. He leaps in with a knee that cuts Volkov. Alexander scores a takedown and winds up in half guard. He begins raining down some serious ground and pound. The horn sounds to end round one.

Round two begins and Volkov lands an early low kick. Struve fires off a combination that ends in a right hand over the top. Alexander is trying to find his way inside. Struve won’t let him and connects with an uppercut. Volkov with a low kick that causes Struve to slip. He gets back up and accidently lands an eye poke. The referee stops the action so the doctor can take a look. Volkov says he is ok and we continue. Volkov lands a nice low kick. Struve fires off an uppercut. He lands a left hook and then just misses with an overhand right. Volkov connects with a huge uppercut. That appeared to rock Struve who circles off the cage. Stefan comes forward with a right. Volkov counters with a left hand. He presses forward and pushes “The Skyscraper” against the cage. Big shots from Alexander. Struve with another eye poke. Once again the referee steps in and puts a stop to the action. Volkov says he is ok and we continue. Both men fire off hard low kicks upon the restart. Struve shoots in but the attempt is stuffed by Alexander. Struve with a head kick that just misses. He lands a right hand. Volkov responds with a right of his own. He goes to the body of Struve and then lands another massive right hand. Struve is backing up now. Round two comes to an end.

Round three begins and Struve lands a couple of nice left hooks to start. Volkov counters with a nicely timed right hand. Another eye poke, this time from Alexander, stops the action. We restart and Struve connects with a nice right hand over the top. Volkov answers with one of his own. Struve misses with a left hook and Volkov counters with another big right. Both fighters are busted up and bleeding now. Volkov lands a big low kick and then a right hand over the top. He is taking control now. Another hard low kick lands for Alexander. Struve paws with his left jab. Volkov comes over the top with a right. He lands a nice kick to the body. Volkov with a big punch that drops Struve. He comes in with some ground and pound and this one is all over! WOW!