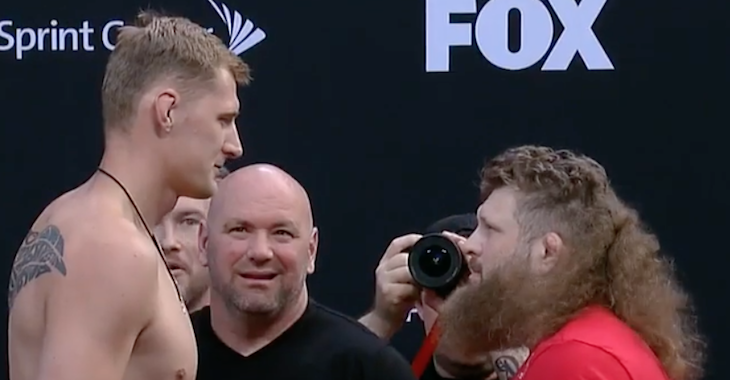 A heavyweight tilt between Roy Nelson and Alexander Volkov served as the featured bout of tonight’s UFC on FOX 24 event in Kansas City.

Round one begins and Volkov starts things off with a front kick to the body. He lands a low kick. Nelson pressures Alexander and pushes him against the cage. Volkov is able to break free. He circles off the cage and lands another front kick to the body. He scores with a low kick. Nelson shoots in and attempts a takedown. Volkov defends. Nelson has him presses against the cage. Roy with a nice knee inside. Volkov switches the position and unleashes a hard knee. Nelson absorbs it and then scores a takedown. Volkov is utilizing the cage in an attempt to wall walk. He gets back up but Nelson drags him right back to the floor. Roy lands a pair of left hands. He traps the right hand of Volkov but Alexander is quick to get it back. One minute remains in the opening round. The referee steps in and forces the fighters to stand up. Roy lands a big right hand. Volkov fires back with a combination that appears to hurt Nelson. Roy retreats but then comes forward with a big right hand. The horn sounds to end round one.

Round two begins and Roy presses forward with a right hand. The crowd begins chanting “USA USA”. Nelson with a right hand that finds a home. Volkov circles away. Roy chases after him and presses Volkov against the fence. He begins working some short left hands inside. Roy switches to knees. He shoots in for a double leg but Volkov defends the attempted takedown. Alexander breaks free and throws a combination. Roy circles away. Volkov’s hands are low now. Nelson shoots in but cannot secure the takedown. Volkov lands a front kick to the body. Nelson takes a big deep breath after that one. Volkov lands a pair of jabs. Nelson looks tired. Still, he charges forward with a combination. Volkov with another nice kick to the body of Nelson. He follows that up with an uppercut. Nelson replies with a hard left hook. He misses with an overhand right. Volkov with a pair of jabs. Nelson lands an inside low kick. Round two comes to an end.

Round three begins and Nelson fails with an early takedown attempt. Volkov makes him pay with a three-punch combination. Roy continues to press forward but eats a low kick. Nelson comes over the top with a left hand. Volkov replies with a front kick to the body and then a jab. Nelson is chasing after him but Volkov is utilizing his range very well. Neslon presses forward with an uppercut and then a left that partially lands. Volkov fires back with a stiff jab and then a low kick. Two minutes remain in the fight. Nelson presses Volkov against the cage but fails on yet another takedown attempt. Volkov makes him pay with a knee as they break. Nelson continues to press forward as always and lands a left. He goes to the body with a jab. Volkov lands a knee and then a kick. He circles out and then lands a combination. Nelson charges forward and lands one last right hand as round three comes to an end.